The Trouble with Love by Heather Boyd (Distinguished Rogues, #8) 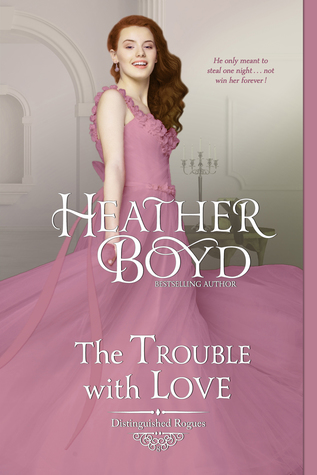 The Trouble with Love
by Heather Boyd

Passion collides with promises given The Trouble with Love, the eighth Distinguished Rogues novel by Heather Boyd.

Keeping a promise has never been harder!

Whitney Crewe has a dream for her life, and it does not include a properly boring marriage or remaining in England. Passionate by nature, she's headed for an adventure abroad but has been temporarily lured into the countryside to paint an important family portrait. Unfortunately, a friend is set to marry the family's nearest neighbor, Lord Acton, and he is someone Whitney has seen far too much of...with and without his breeches on. Their past must remain a mere memory, but ignoring him proves impossible when she understands the decisions he's made to protect those he loves.

Lord Acton is keeping secrets from his friends, and particularly from his innocent bride-to-be. The first was losing his head over an intoxicating, veiled seductress one gloriously reckless evening. A man of his word, he has no choice but to keep his promise to wed, even after he discovers his seductress was his bride's friend, eccentric heiress and artist, Whitney Crewe. The second secret, Whitney stumbles upon all on her own, but her anger swiftly becomes an offer of friendship and much-needed compassion. They have absolutely nothing in common, so why oh why would he risk his future getting to know Whitney when she's opposed to everything he desires?

A humorous and hot regency romance.

The Trouble with Love by Heather Boyd
(Distinguished Rogues, #8)

Not sure the London Ton could fan fast enough or breathe the smelling salts deep enough for the likes of Whitney Crewe, a woman decades before her time! Independent, wealthy and talented, this free spirit will not be chained to the expected dull marriage. She wants to live a little first and settle down on her own terms, with the kind of man who can set her soul on fire, accept her as she is and feel the joy of love and life the way she does.

Lord Acton isn’t getting any younger and has made the expected marriage contract to an unknown young lady of breeding and wealth. One last night of reckless abandon puts him square in the sights of Whitney and oh my, did she get an eyeful! Little did he know he would make her acquaintance again in the countryside or that she would be a friend to his innocent and proper, future wife, who does not stir his passions as the fiery Miss Crewe does.

Awkward at best, prickly at worst, these two have a less than harmonious relationship as Whitney discovers Acton is keeping more secrets than their one night of unconsummated passion. Is Acton the heartless cad Whitney believes him to be or is her the man she has been looking for, the man who is her match in every way?

Heather Boyd’s THE TROUBLE WITH LOVE is humorous, hot and certainly not your usual “stiff upper lip” regency romance! Secrets abound, and the true measure of a man is revealed, but not until the wrong assumptions are made. A fast read that is not mired down in the stuffy façade of propriety, no matter how hard the Lord tries to do the right thing for those he loves, no accolades expected. Ms. Boyd has created two characters that cause the rest of their world to fade with their vibrancy and willingness to be passionate about life, regardless of what the rest of their world wants.

I received an ARC edition from Heather Bloyd!