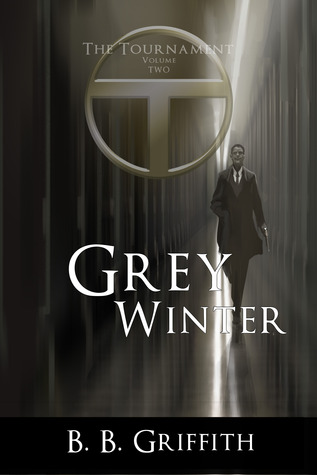 Two players have been murdered. Two killers are on the loose. Nothing is what it seems.

The world is awake now. The Tournament has captivated everyone, but no winner can be declared until the mystery of what happened to Team Blue is solved. Meanwhile, three new players are chosen to rebuild the fallen team, but they are young and inexperienced, and instantly targeted. Their survival is dependent upon their existence remaining a secret.

But in the Tournament, secrets are hard to keep.

New alliances are formed, old enemies are confronted, and the truth is finally revealed in Grey Winter, the second installment of the Tournament series.

Someone went too far, no one is supposed to die, but two players have and the Tournament will be forever changed. GREY WINTER by B.B. Griffith takes off with a chaotic twist to the long established rules of the game. Someone has broken with their code of honor, and one team is gone and must be replaced only to become fair game for every other team out there in this international high stakes game of survival and power. Not only that, they have been exposed. The world knows and the world wants in on the action, even if only in a peripheral way.

As the foundation of the Tournament begins to crumble, each team must decide for themselves, who can they trust, who must they eliminate and how far they will go to do so. What started as a bizarre way to end conflicts and fatten the purses of power has become something ugly, something less and the public is eating it all up like candy. The secret lives of the players are now non-existent and their every step has become fodder for entertainment, just when their lives have never been in more danger and evil has leached into the very fiber of the Tournament.

I couldn’t help but feel this time out that the instability and the lowering of game standards echoed the world today, still filled with good people, but losing some sense of humanity in the pursuit of “more” of everything from power to control at any cost.

Another high-octane, high tension and highly chaotic tale that races past in a blur. Who can be trusted and why? How did the world find out about the Tournament, and what made them actually believe? So many characters, so many personalities and so much action woven into knots of barbed wire! Mind boggling, brilliant and not so far-fetched?