Midwife in Behruz by Judy Meadows 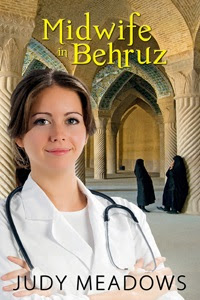 Midwife in Behruz
by Judy Meadows

Lay​la's trip to Behruz, her father's country and home of her early years, is meant to be one last adventure before she joins her dreamboat fiancé in Texas. But Behruz casts a spell on her. Her knowledge as a midwife is needed there. Serving women's health in a country where no one talks about "such things" presents interesting challenges.

Majid, an American-trained doctor, is back home in Behruz serving his people.​ He's ready to settle down, but because of an old family ​bias, American women are forbidden to him. That's no problem until Layla walks into his clinic with a sassy smile, a jar of semen, and her T-shirt proclaiming "Midwife at Your Cervix."

Midwife in Behruz by Judy Meadows

Anyone who knew Layla would never call her a Shrinking Violet and when this American midwife lands in the land of her birth with its restrictive customs and blushing sensibilities, she will bring about a whole new level of International understanding, even if it is only with a tiny group of people.

MIDWIFE IN BEHRUZ by Judy Meadows is a humorous and light-hearted look at one woman’s brief stay in a fictional Middle Eastern country. Follow Layla as she meets a man who will change her life over a jar of royal semen, yep, really. (Shhhh, whose it is, is a secret!)

Layla was caught between two worlds, the land where she grew up and the land she was born in, so it only seemed right to have one last adventure before settling down with her All-American, blonde fiancé. Little did Layla know that her journey to Behruz would capture her heart in more ways than one!

Follow Layla as she delivers babies, helps one Royal attempt to conceive and endears herself to one family by simply shopping for them at a local pharmacy! That Layla may have found the magic her heart was missing back in the United States is like the frosting on this light and fluffy romantic tale.

Judy Meadows avoids the pitfalls of high angst and feeling alienated in a strange country through her feisty and endearing character, Layla. Definitely a fun read that still holds some thoughtful tidbits about the differences between cultures around the world, not to mention some great T-shirt logos that few could say were not pretty funny!

I received a complimentary review copy from Judy Meadows!