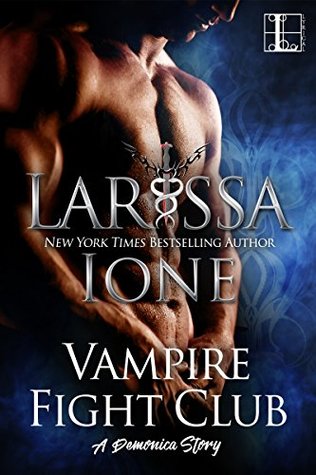 New York Times bestselling author Larissa Ione tempts you into the darkly irresistible world of Demonica, populated by angels and demons, shifters and humans, all with a thirst that must be quenched . . .

When a wave of violence that hits too close to home forces shapeshifter and underworld nurse Vladlena Paskelkov to go undercover, her first stop is a haven of vice—with a dangerously sexy vamp in charge . . .

Legendary, jaded, Nathan Sabine is the manager of Thirst, a wildly popular vampire club—and secret underground blood arena. But Nathan, a rare daywalker, possesses other, even more explosive secrets, as does his beautiful new medic, Vladlena. The one thing they can’t conceal is the lust that simmers between them . . .

Now, in an underworld divided by revelry and violence, debauchery and vengeance, Nate and Lena will discover which risks are worth taking—and which desires demand surrender . . .

Bloodthirsty vengeance isn’t all she or he thought it would be in VAMPIRE FIGHT CLUB, book 6.5 in the Demonica Series.

Lena was working as a nurse in the UG when someone very close to her is rushed in just in time to die. Vladlena, aka Lena, makes it her mission to uncover and make his murderers pay. She never imagined getting caught up in the paranormal fight club world would lead her to Nathan.

A heavy dose of the darker side, a splash of mystery and some smoldering hot chemistry make Vampire Fight Club a marvelous addition to anyone’s reading shelf. If you are a fan, you won’t want to miss this teasing taste of more of the Demonica – Vampire Fight Club series.