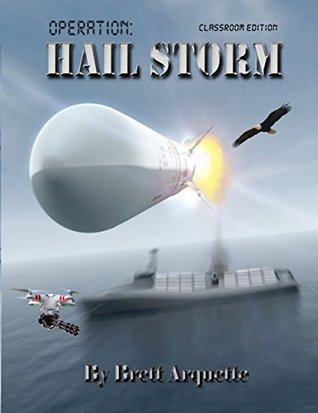 Marshall Hail was a husband, a father, a Physics Nobel prize winner and industrial billionaire. But when Hail's family was killed in a terrorist attack, he became a predator and redirected his vast industrial assets toward one goal, removing every person on the FBI's Top 10 Terrorist list. With the help of his MIT colleagues, Hail designed and built a devastating arsenal of attack drones of all shapes and sizes that are flown by the nation's best young gamers. The world will come to realize that Marshall Hail possesses the capability of getting to anyone, anywhere, at any time, unleashing an operation so disturbing that the CIA has named it Operation Hail Storm.

His past defined the man he is today. Marshall Hail was once a family man, a brilliant physicist and a very wealthy industrial genius. When a terrorist brought down the plane that held his heart, Hail would devote his life to becoming a warrior, his soldiers were gamers, tech geniuses and his battleground could be fought without ever stepping foot in enemy territory. Hail and his team became a techno army of unlikely soldiers and their drones were his snipers, his spies, his explosives. He would avenge the deaths of his family...

Now he will team up with the U.S. government for a black ops mission that afforded the White House with complete deniability. Aided only by one agent, Hail will discover that in the theater of war, even his ally could be his greatest enemy. Keep your friends close, your enemies closer and learn to recognize the difference between the two.

Enter the fascinating and mind-boggling world of super high tech, master gamers, and geniuses with a seemingly endless supply of cash to further a just cause, wipe out the villains of the world, and whittle down the FBI’s Top Ten Most Wanted List. Be part of an operation run with joysticks, risk calculations and drones that are more than an eye in the sky.

Hail has taken a mission that requires he have CIA agent, Kara Ramey on board his customized “world” within a ship. Her assignment is to act as a liaison, an observer, an advisor, but even Hail knows that translates to spy. What Hail didn’t expect was that Kara would figuratively stab both himself and his dedicated crew in the back, forcing them to rush a mission that required a delicate balance if it were to have any chance of success.

High tech science fiction, over-the-top action, emotional turmoil, one too any quests for revenge and a government that reaches out its hand in an offering of trust only to conceal their own backdoor machinations. If you like adventure, the mystique of technology beyond average understanding, and the fascination of thinking, what-if we could do that, wouldn’t wars be ended before they begin? Couldn’t we stop terrorists in their tracks? Follow the secret heroes behind the scenes as they take technology by the horns and tame it into tools that will boggle the mind!

OPERATION HAIL STORM by Brett Arquette is an action-packed techno-thriller that will send one’s imagination into a dizzying spiral of possibilities!