The Bone Curse by Carrie Rubin (Benjamin Oris, #1) WITH #Giveaway! 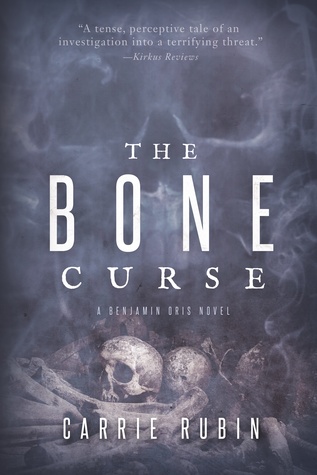 The Bone Curse
by Carrie Rubin

Step into a world where science and dark magic battle to the death...#Enter Carrie Rubin's ARC Giveaway for a chance to win a copy of THE BONE CURSE
ARC giveaway goes until January 21st. Here’s the link to Carrie Rubin's blog

Two giveaways—one for US entrants and one for international entrants!

MEDICINE HAS NO CURE FOR EVIL...

Ben Oris, a pragmatic med student from Philadelphia, gets cut by an old bone while touring the Paris catacombs. His companion Laurette, a public health student from Haiti, senses danger and worries an evil curse now runs through him.

Ben scoffs at the idea—he simply has a wound that won’t heal—and back home he returns to his stressful clerkship at the hospital. But when people close to him succumb to a grisly illness and a dark priest pursues him, his skepticism waivers. Could a bone from an 18th-century skeleton with a frightening history really cause modern-day disease?

With the help of Laurette, he scrambles to find a cure through Vodou before more of his loved ones die. But first, he must battle the mysterious priest who’s bent on vengeance and determined to have Ben’s blood as his own.

The Bone Curse by Carrie Rubin

Do you believe in the unbelievable? Are you willing to admit the power of old magic and ancient beliefs can become physical manifestations? The world of medicine and the occult collide when the trip of a lifetime for a young medical student becomes a cursed nightmare that has medical science baffled and one man teetering on the edge between education and the unbelievable. Carrie Rubin’s THE BONE CURSEis a tale of revenge and the power of Haitian Vodou while modern medical knowledge is put on notice that there is more to life than what can be seen under a microscope.

Medical student, Ben Oris is cut by an ancient bone while touring the Paris catacombs and now, it isn’t healing. When his friend from Haiti “feels” a sense of danger, Ben refuses to believe in the possibility of a curse until people around him become deathly ill with an undefinable wasting disease. As the death toll mounts, Ben must face the possibility that there is more to life than what can be dissected or explained. Is there something about Ben’s blood that holds a secret from the catacombs? Why would he be the “chosen one” to deliver death after dedicating his life to healing?

When an innocent is taken as a sacrifice, Ben must learn to believe in order to battle the darkest of evils from the world of the occult, both physically and with the power of white magic.

What could be more intriguing than a pitting medical science against an ancient occult belief?
Carrie Ruben brings chaos to life as one man stands alone against the dark forces of the unexplainable. Teeter on the brink of the abyss with Ben as shadowy malevolence stalks him and logic holds no answers. From that first drop of blood, the stage is set and we become entangled in a world that cannot be brushed aside, that will not let up as we are slammed into a maze of death and darkness with no light at the end of the tunnel for these characters. Just when you think, all will be over, the bottom drops out again, and all we can do is hang on by our fingertips!

Simply fabulous, high-tension reading that will ratchet your heart rate as you feel your pulse pounding!

I received a complimentary ARC edition from Science Thrillers Media and Carrie Rubin. This is my honest review.

https://carrierubin.com/2018/01/08/the-bone-curse-a-supernatural-medical-thriller-advance-reader-copy-giveaway/
OR Enter Below!
Two giveaways—one for US entrants and one for international entrants!