The Fourth Gunman by John Lansing 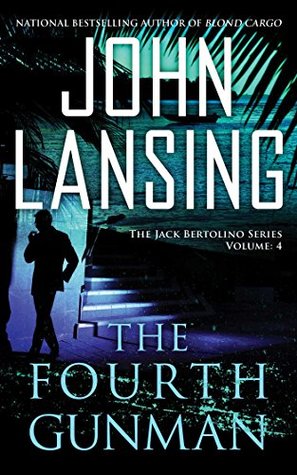 The Fourth Gunman
by John Lansing

A captivating thriller in the Jack Bertolino series full of intrigue, action, and dark humor as Jack is called in to investigate a missing persons case.

Jack Bertolino is a retired investigator who just can’t seem to get away from the job. He’s the best at what he does, with a moral compass that doesn’t point quite true north and a dark history with the mafia. To the FBI, Jack is about as valuable a man as they could ask for. So when one FBI agent’s brother goes missing, Jack is pulled into a search that could mean the difference between life or death.

Sometimes it isn’t what you know, but who you know and Jack Bertolino seems to have a handle on who to know when he needs help on a case involving an undercover agent who has gone missing.
Jake was working on a mafia owned gambling ship, there one minute, gone the next. No trace, but plenty of suspicions. Had he double-crossed the big guy and run off with a large chunk of cash? Had he been discovered and eliminated?

Follow Jack through the twists and turns of investigating, attraction to a young mafia princess, dinners with a mob boss and a list of favors called in and favors returned. Where is Jake? Could his sister, an FBI agent, be wrong about him? Was he playing both sides of the fence or was someone out to frame a man who wasn’t there to defend himself?

High rollers, beautiful people seeking a private place to gamble and more, Jack is up to his ears in gritty intrigue, dark humor, lies and deceit. One thing for certain, this retired investigator isn’t afraid to use any methods at his disposable to get the answers he seeks in THE FOURTH GUNMAN by John Lansing.

For fans of suspense and mystery, heroes who know how to dig up the dirt and uncover those pesky skeletons in the closet, THE FOURTH GUNMAN is a great read to sink into. A little gritty, with a hero who colors outside the lines!

I received an ARC edition from Gallery Books!