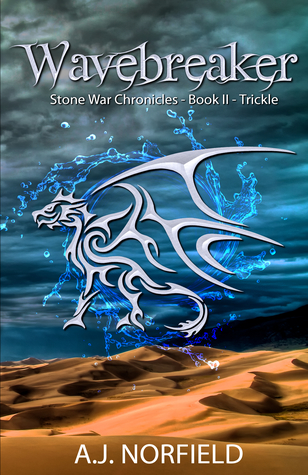 Black ships darken the sea and sky, destroying everything they encounter. High General Corza Setra has mobilized the Stone King's legions—but where is he taking them?

When Trista’s village is obliterated without warning, it’s up to her to keep her little brother and newly hatched dragon safe. She’s always held her own as one of the waterclans, but will her skills as a hunter be enough for her to conquer the hardships that await them on the road ahead?

Meanwhile, the pressure is on for Raylan and his friends as they flee the Dark Continent. Without their commander, the squad’s strong leadership is gone and those left struggle with the burden of the oncoming danger. Can they stop the Stone King’s forces—including the deadly ghol'ms—from ravaging the world as they know it?

The Stone King’s dark legion is on the march, conquering, pillaging, murdering all who have the misfortune to be in their sights. With their parents and their village gone, Trista must assume the role of protector and lead her young brother and their hatchling dragon to safety.

Meanwhile, heroes will be tortured at the malicious hand of the Stone king and his minions as his monstrous Ghol’ms stand by, awaiting their next command to spill more blood. Raylan may find he and Gilarras are the last hope to warn others and raise the battle cry. Duty calls and it will not be denied.

A.J. Norfield continues his dark, epic tale of fantasy as good must once again stand against the forces of evil. Follow Trista as she becomes a warrior in her own right on her journey escaping the land of the waterclan. Battling to survive, she will undertake a near-hopeless quest to save her small group. As she faces sandstorms, starvation, and lack of water, she will be required to make hard decisions that could cost her the lives of herself and the young innocents in her charge.

Will she find allies at the end of her journey or is this just the beginning of a new future with much more to come?

Once again, A.J. Norfield brings fantasy to life with a vengeance. This is not a sweet fantasy tale. This is a tale of brutality, of the will to live versus the will to conquer and kill. In a constant state of tension, this tale unfolds with amazing character development and growth throughout! Feel the grit of the sands, the torturous heat of the sun and the gnawing pain of hunger and thirst. Be mesmerized by dragons, even as they suffer alongside their human companions. They are proof that legends can be real and their loyalties know no bounds.

This is how epic fantasy should read, powerful, edgy, and with a feeling of time and distance passing by. Definitely not a quick read, but one to fall into and live, soar with a dragon, match step for step with these characters as their worlds expand and their quest continues along an often heartbreaking trail with only the unknown ahead.

I received a complimentary ARC edition from A.J. Norfield!