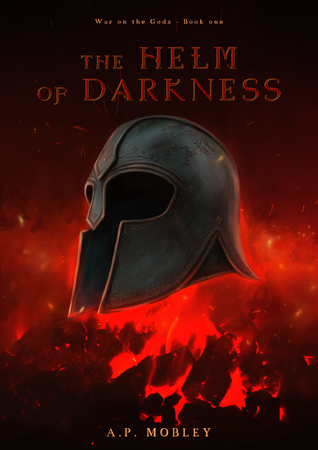 The Helm of Darkness
by A.P. Mobley 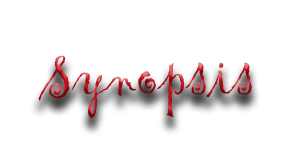 Andy and Zoey are two normal teenagers living in the modern day—that is, until they’re knocked unconscious in a freak storm sweeping the United States.

When they wake up, the world they know has been tossed away. Their city is in ruins, strange creatures walk the earth, and worst of all, everyone is gone. They stumble across Diana and Spencer, two kids around their age who possess incredible magical abilities, and who claim to be the demigod children of Greek gods. Not only that, they also claim the year is 500 AS, five hundred years after the gods conjured a massive storm that destroyed most of humanity and helped them take the world as their own once again.

Andy and Zoey are soon handed an impossible task: To save humanity. To lead a war on the gods.

They’ll have to battle monsters, death, and their own inner demons to survive and to protect the people they love. 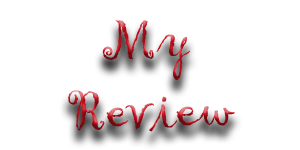 Being released just in time for summer vacation, A.P. Mobley’s THE HELM OF DARKNESS is “fantasy” enough to enthrall young adult readers as the power and determination of youth is tested to the limits in a world decimated in the blink of an eye.

One minute it was a normal day for Andy and Zoey, the next, the sky was raining deadly swords and all that they knew, everyone they loved was dead. Then, in the blink of an eye, they are thrust five hundred years into the future, caught up in a world where Greek gods are real and they are the last chance that humanity has to survive.

With unlikely allies by their side, they will be tasked with entering the bowels of Hades to retrieve THE HELM OF DARKNESS in the first step to taking back the world.

A.P. Mobley has created a world of fantasy, a world of danger and the unknown where monsters are real, demigods walk the earth and the gods are caught up in their own quests for power and control. Feel what Andy and Zoey feel, see the world through their eyes and be part of a great adventure that is spellbinding! These characters are not superheroes, they are kids caught up in a war not of their making, but, in the invincible spirit of youth, through their doubts and fears, they undertake the impossible in the name of humanity!

Fabulous reading! Incredible world-building! Characters that come to life! Tons of twists, lots of action! A great escape into the world of reading and imagination!

I received a complimentary ARC edition from A.P. Mobley!

Hey there! My name is A. P. Mobley, and I’m the author of a new action-packed fantasy trilogy with lots of Greek mythology called War on the Gods. The first installment of the trilogy, The Helm of Darkness, is my debut novel and comes out on June 3rd, 2018. It follows two teens as they are knocked unconscious in a freak storm. When they wake up, they find they’ve been transported 500 years into the future, that the Greek gods were the ones who sent the freak storm to destroy the modern world and take back humanity’s worship, and that they are the key to a prophecy stating a war will be led on the gods. With the help of two demigods they begin their quest to become worthy opponents of the gods.
Greek mythology is one of my all-time favorite subjects and I’ve been reading about it since I was only 11 years old in every format I could get my hands on. I’m honored to be here today on the blog writing a guest post on the subject, and I have an illustration of a scene from the first chapter + the quote depicting it at the end of the post. So stay tuned!
Today I wanted to talk about one of the most exciting parts of Greek mythology for me and many others, which are the monsters of the stories. From the Minotaur to the Hydra to the Cyclops, I think it’s safe to say that throughout the ages these mythical beings have both fascinated and terrified humanity. Which is why today I’m going to be bringing you my top ten most terrifying mythical Greek monsters and the stories they’re featured in, several of which make an appearance in The Helm of Darkness, or will make an appearance in future installments of the trilogy.

The Amphisbaena was a venomous serpent-like creature with a head on either end of its body. It spawned from the blood that dripped into the Libyan Desert from Medusa’s neck as Perseus flew over the desert on Pegasus with her severed head in hand. When Cato’s army passed through the desert, it is said the Amphisbaena fed on the corpses left behind. 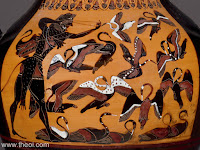 The Stymphalian Birds were vicious, man-eating birds with poisonous droppings, bronze beaks, and sharp feathers that could be shot at their victims. It was Heracles’s sixth labor to defeat these birds. To kill them, he lured them out of their nests and shot them with poison-laced arrows. 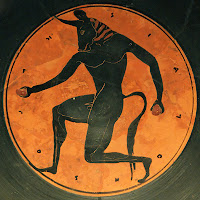 The Minotaur was a creature that was half-man, half-bull, who lurked in the Labyrinth under the palace of Knossos in Crete. Every nine years seven young Athenian men and women were sent to the Labyrinth to be eaten by the Minotaur to appease King Minos for the killing of his son. When the third sacrifice came, Theseus, son of Aegeus, volunteered to go and slay the monster. He used a ball of thread to navigate through the Labyrinth and killed the Minotaur with his father’s sword. 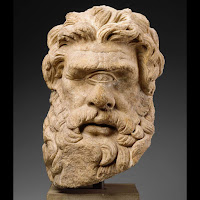 The Cyclops, or Cyclopes (plural), were the giant, one-eyed, man-eating children of Poseidon. In other versions of the myth, they were the children of the Titans Uranus and Gaia. Polyphemus, a Cyclops that was tricked and blinded by Odysseuss, is probably the most famous of the Cyclopes. In one story Polyphemus fell in love with the nymph Galatea, but she denied his advances for a young man named Acis. Enraged, Polyphemus crushed Acis with a boulder. 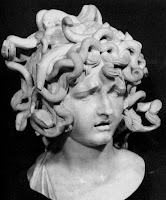 Medusa was a winged woman with snakes in place of her hair whose gaze would turn living beings to stone. At one time she was a beautiful maiden, wanted by many men. Poseidon pursued her, and when she rejected him and fled to Athena’s temple to ask for protection, Poseidon raped her there. As punishment, Athena transformed her into a monster. Some people say this was not intended to be a punishment, but a means of protection for Medusa, as any man who dared take advantage of her in the future would be turned to stone.

The Lernaean Hydra was a water monster with poisonous breath and blood, and seven heads. Any time a head would be cut off, two more would grow from the stump. It was Heracles’s second labor to slay it. As he cut off each of the monster’s heads, his nephew Iolaus cauterized the wound so that no heads could grow back.

The Trojan Cetus was a huge serpentine sea monster sent by Poseidon to plague the city of Troy because the king refused to pay for the building of the city’s walls. The only way to appease Poseidon would be to offer the king’s daughter, Hesione, to the monster. The king chained Hesione to the rocks by the sea as an offering, but Heracles defeated the Trojan Cetus with a fish hook before it could devour the princess.

Charybdis and Scylla were two monsters on each side of the Strait of Messina. Charybdis was described as a creature that lived under a rock on one side of the channel, and three times a day she swallowed massive amounts of water then threw it back up, which created whirlpools that could destroy ships. On the other side of the channel, Scylla, a six-headed creature, devoured sailors as they passed by. When Odysseus and his men passed through the strait, he decided they would sail closer to Scylla so that they would only lose a few men rather than the entire ship.

Echidna was known as the mother of monsters, and mate to the most terrifying monster in all of Greek mythology: Typhon. She was half-woman, half-snake, lived alone in a cave, and feasted on the raw flesh of men. Some say she was immortal, while others said that after many years of preying on anyone that came her way she was slain by Argus. Some of her monstrous children were Orthrus, Cerberus, and the Lernaean Hydra.

Typhon is said to be the most dangerous of all monsters in Greek mythology. He was so large his head touched the sky. On the top he was a winged humanoid creature, while on the bottom he had huge snake tails, and some say he breathed fire. He fathered many monsters with Echidna, and at one time attempted to overthrow Zeus, King of the Gods. Zeus ultimately defeated him.

So there you have it folks! The top ten most terrifying mythical Greek monsters. Since you’ve stuck around until the end, here’s that lovely illustration of a scene from chapter one of The Helm of Darkness + the quote that depicts it:

“The sky had opened into an angry vortex, and the largest, most brilliant gold lightning bolt yet shot from it, straight for them. It illuminated the fast-falling raindrops like millions of miniature lightbulbs. Her heart stopped. In that moment, she knew they were dead.
The bolt struck the pavement of the parking lot and filled the air with cement, metal, and screams.”

You can read the full first chapter here: https://seaofinkpress.wordpress.com/2018/03/23/the-helm-of-darkness-chapter-one-storm/