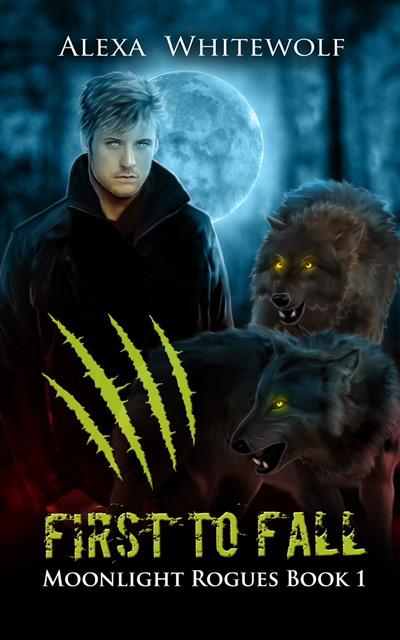 First to Fall
by Alexa Whitewolf

Once upon a time, Dominic Kosta didn't have a last name. In fact, he had nothing growing up in a secluded orphanage in the mountains of Transylvania. Then an American couple adopted him, and life changed. He left behind the old
legends, the myths, the hunger within him.

He threw it all behind, choosing seclusion and a little town....

Rockland Creek may be a hole in the middle of nowhere, but Dom's happy there. Life has its perks between fixing cars and seducing women. And best of all? There are no rules, other than Lucas'. Then Lucrezia San Marco walks in, and draws him in like a moth to a flame. Only, she only has eyes for Lucas, his boss - and alpha of the pack.

There's nothing normal about Rockland Creek - or Dominic's existence there. But things are about to get worse, and not just because he sees the girl he loves slipping through his fingers.

A war is brewing, eclipsing their romance and dragging old ghosts into town...

As Dominic navigates the murky waters of romance and obedience to his leader, his feelings for Lucrezia can no longer be tamed. But not everyone supports their relationship - and the Reapers have a word or two to say against it. As does Lucrezia's ex, and the demons he brings with him.

Fire and ice, cold and hot, wolf and human. Dom and Luz will have to combine their differences and learn to compromise, or risk being torn apart by the wave of change unfurling onto Rockland Creek.

Book I in a new series of sizzling werewolves, forgotten folklore and untamed legends.

Dom was drawn to Lucrezia from the moment she stepped into the auto repair shop in tiny Rockland Creek. Lucrezia, the new receptionist in the shop is a feisty young woman who has had a difficult life. She also has the hots for Lucas, the literal Leader of the Pack, the alpha and Dom is his second.

Lucrezia sees Dom has a good friend, probably her closest one, so when Dom offers to pretend to be her boyfriend under the guise of making Lucas take notice of her, he has his own motives, he wants the girl, the girl his alpha has called off-limits. Can Dom resist the command of his alpha? Should he?

There is more to Dom than meets the eye and when a rival pack invades their land, Dom is about to discover who he is and who he was meant to be, will it include Lucrezia by his side? Fate knows best and the chemistry is there, but can a wolf and a human really become mates? Will the Reapers allow it or will their dark agenda threaten Lucrezia’s very existence?

FIRST TO FALL is Alexa Whitewolf’s latest paranormal romance with just enough tension to make for some easy reading without an overbearing cast of darkness! Wolf will stand against wolf, pack bonds will be strained, but the heart knows what the heart wants…

Wonderful characters, none over-the-top, but almost easy going until the going gets tough and then all bets are off! A nice touch of romance, strong friendships that can be counted on and secrets revealed that could change the balance of life in Rockland Creek! Will the wolf get his girl? Dual POVs add dimension and personality to each page!

A fabulous start to a series that is sure to be a hit in the paranormal world!

Author Bio: The basics? I was born in Romania (yep, Dracula's country!) in 1992. As a curious kid, I devoured every book I could on Greek, Roman, Ancient Egyptian mythology. I studied university in political science and languages. I speak five of them: french, english, romanian, italian, spanish (feel free to correspond with me in whichever language!). My current hobbies outside of writing? Training dogs, running, reading. So, how did I get into writing? I've been writing for as long as I can remember. I wrote my first novel, The Sage's Legacy, when I was 14. It's currently undergoing a new editing process, and hoping to release it along with the sequels sometime soon :) I'm one of those people with an overactive imagination (my main #1 reason as to why I can't watch horror movies!), so I put it all on paper. I dream about it, zone out about it, doesn't really matter when or where, something's always in my head. And, sometimes, those somethings turn into novels. Like Avalon Dream! I dreamt one of the scenes, a night way way back, when I still kept a journal. Woke up at 5am, wrote it down in my faithful little notebook, and forgot about it for years! My lovely fiance found it one day while we were cleaning, and asked me what it was all about. So I started telling him about the story, and as I'm talking, it develops into this larger narrative... And yep, you guessed it, I wrote it down. I worked on it for months, and spent even more months editing. I currently have three series out: my fantasy romance trilogy - The Avalon Chronicles (completed), my young adult paranormal romance - The Sage's Legacy and my newly published werewolf paranormal romance - Moonlight Rogues.
To find out more about Alexa Whitewolf you can visit her at: Amazon Page: https://www.amazon.com/default/e/B01JZH0HK6 Facebook: https://www.facebook.com/alexawhitewolfauthor Website: https://www.alexawhitewolf.com Goodreads: https://www.goodreads.com/author/show/660987.Alexa_Whitewolf Twitter: https://twitter.com/alexa_whitewolf