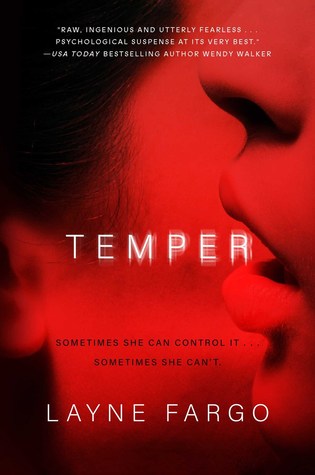 After years of struggling in the Chicago theater scene, ambitious actress Kira Rascher finally lands the role of a lifetime. The catch? Starring in Temper means working with Malcolm Mercer, a mercurial director who’s known for pushing his performers past their limits—on stage and off.

Kira’s convinced she can handle Malcolm, but the theater’s co-founder, Joanna Cuyler, is another story. Joanna sees Kira as a threat—to her own thwarted artistic ambitions, her twisted relationship with Malcolm, and the shocking secret she’s keeping about the upcoming production. But as opening night draws near, Kira and Joanna both start to realize that Malcolm’s dangerous extremes are nothing compared to what they're capable of themselves.

An edgy, addictive, and fiendishly clever tale of ambition, deceit, and power, Temper is a timely, heart-in-your-throat psychological thriller that will leave you breathless.

I think my skin was crawling with tension throughout this dark, dry tale. Two women, both ambitious, both attracted to a sadistic, domineering actor, both driven beyond their boundaries and both on a collision course of destruction.

Twisted, brutal emotionally for the characters and filled with deceit and manipulation, there wasn’t really a developed character that I liked, but I give kudos to Layne Fargo who wrote in bold strokes to bring forth a tale one will not soon forget.

TEMPER by Layne Fargo had me unsettled throughout and after struggling to get through the first half of the book, it opens up into a full throttle, jagged edged thriller that made my head spin, a total love-hate read for me! I found myself wondering: How far would you go to achieve your personal dreams? Would you forsake your very soul?

I received a complimentary ARC edition from Gallery/Scout Press!