The Hidden Things by Jamie Mason 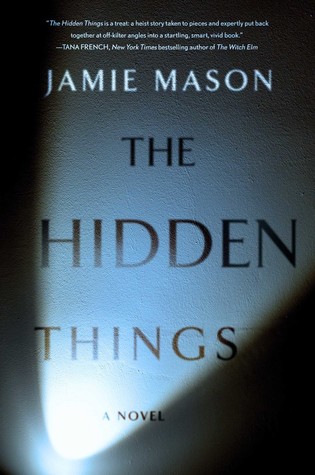 The Hidden Things
by Jamie Mason

In less than half a minute, a home-security camera captures the hidden resolve in fourteen-year-old Carly Liddell as she fends off a vicious attack just inside her own front door. The video of her heroic escape appears online and goes viral. As the view count climbs, the lives of four desperate people will be forever changed by what’s just barely visible in the corner of the shot.

Carly’s stepfather is spurred to protect his darkest secret: how a stolen painting—four hundred years old, by a master of the Dutch Golden Age—has come to hang in his suburban foyer. The art dealer, left for dead when the painting vanished, sees a chance to buy back her life. And the double-crossed enforcer renews the hunt to deliver the treasure to his billionaire patrons—even if he has to kill to succeed.

But it’s Carly herself, hailed as a social-media hero, whose new perspective gives her the courage to uncover the truth as the secrets and lies tear her family apart.

The Hidden Things by Jamie Mason

It was an art theft that went very wrong, but that was years ago and who would think that one man’s twisted greed would backfire when a home invasion and attack on a young girl exposes the truth.

THE HIDDEN THINGS by Jamie Mason is a tense and alluring read as greed meets revenge head on and one man’s big secret is caught on video and goes viral. Proof that in today’s technology, nothing is private, double-crossing powerful people is dangerous and Karma has no expiration date.

Taut and edgy throughout, prepare to get familiar with the edge of your seat as this twisted plot unravels at the hands of a teenage girl.

I received a complimentary ARC edition from Gallery Books! This is my honest and voluntary review.