Daughter of Poseidon (War on the Gods #0) by A.P. Mobley 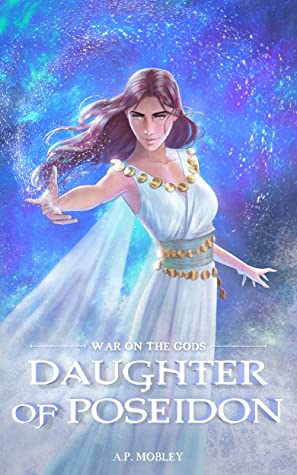 Syrena has a chance to make a difference, and so long as there's a chance, she has to try.

Five hundred years after the Greek gods destroyed the modern world, Syrena, Daughter of Poseidon, lives under the gods' tyrannical rule. However, a centuries-old prophecy says a war will be waged on them. And if that means there's a possibility to help those the Olympians have hurt, a possibility to change things for the better, Syrena will do anything to bring this prediction to life.

Even if it means losing everything she loves.

Gods. Monsters. Magic. The War on the Gods series is perfect for fans of Greek mythology who want a new twist on the old tales.

This short story serves as a prequel to War on the Gods and can be read whether you've started the series or not!

Daughter of Poseidon (War on the Gods #0) by A.P. Mobley

Looking for a fascinating read that is just enough to whet one’s reading appetite while setting the stage for a great series? A.P. Mobley’s talent as an author shines through in this short little tale.

DAUGHTER OF POSEIDON jumps out of the gate and sprints to the end right through Syrena’s story. A wonderful short story that is perfect for young adult readers, no matter how old they are!

I received a complimentary copy from A.P. Mobley! This is my honest and voluntary review.