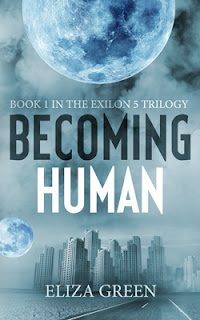 In the future, through overuse, over abuse and over-population, Earth has become toxic to human life. Light years away, exoplanet Exilon 5 is discovered to be a plausible place to relocate humans to. Only problem? It’s already inhabited by another species. Solution? Force the indigenous population to die, or adapt to the changes necessary to support human life. Or, just maybe, they will learn to adapt and hide underground, seeking ways to learn about the invaders. Maybe they have grown smarter, more powerful and superior in many ways to the human race.
Bill Taggert, an International Task Force Agent, is charged with investigating this race, called Indigenes, but Bill has his own agenda on Exilon 5. His wife is missing and presumed murdered by the Indigenes and he intends to get definitive answers in the hopes of finding closure. Contact has been made with an Indigene, Stephen, but attempts to capture him failed. Meanwhile, a young woman, Laura, on her first day at a new high security job at the ESC (Earth Security Center), has discovered highly sensitive files that she can’t help but read. When she is secretly given more information on the same subjects, Bill Taggert and the Indigenes, she is drawn into a twisted and terrifying conspiracy that runs all the way to the top of the political chain. What are the dark secrets being withheld from the population? Why is it necessary for every action made by the population to be monitored by the government?
Viewed and told through multiple POVs, the plot is intricate, involved and intense. With several necessary subplots racing along concurrently, the answers to what is going on will be HUGE! Remember, two worlds, two races, two histories, but what about the future?? Good intentions vs selfish desires are all part of this story, too. What will the final outcome be? Will the human race destroy another world in its quest for supremacy and survival or are the only the privileged few going to come out on top?
Eliza Green had me from page one. Her creative world-building constructed a panoramic view of the consequences of two worlds colliding where both sides want to win, neither trusting the other. Will good conquer evil? I, for one am looking forward to book two, especially after book one’s stellar ending! If you like Sci-fi, futuristic tales, dystopian worlds with underdog ‘good guys’ fighting the good fight, I think you’ll like this! After book one, and meeting Daphne, I’m rooting for the Indigenes!