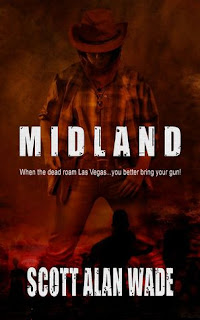 You see the words “fresh take”or “unique take” and you can picture a book you felt that way about, right? There are certain plots with hooks that reel you in and keep you reading, hanging out the Do NOT Disturb sign and for me, without a doubt, Midland by Scott Alan Wade takes the zombie apocalypse where no one has gone before! Many of the remaining humans left alive have scattered and the survivors have clustered together, some remaining in shadows of the big cities, others becoming like the pioneers of old, starting over from scratch, living on isolated farms, traveling by horseback, farming the land. There is no electricity, no rambling homes, life for them has essentially reverted to the days of the old West where the days are long and the work is hard. Families raise their children with stories of how it used to be, when there was electricity, phones, everything we take for granted, because honestly, I can’t imagine life without my Kindles! Fifteen-year-old Sam has had to take the world on her shoulders after the death of her father and the almost certain death of her mother, who is gravely ill. Then there are the zombies who could attack their isolated farm at any time and it’s up to Sam and her younger siblings to fend them off or die. Sam knows her mother’s only chance to recover lies with her as she decides to travel to one of the cities she has heard about in search of medicine. Naive to the world and its treachery, Sam must face the unknown with only her grit, determination and the skills she has been taught.

Looking for a strong young heroine to be amazed by? Meet Sam, who talks and acts like a girl out of a different time, who thinks fast, acts fast and gives all she has to save not only those she loves, but even some who may not deserve it, leaving them to their own fates. Author Scott Alan Wade unleashed his imagination and creative talent in this fast-paced, post-apocalyptic adventure that carries just a hint of young romance mixed into the danger that comes from humans and zombies alike. His writing flows along with great attention to detail as he builds the look and feel of two worlds fighting to survive in their own way. Be prepared to feel the dust of the trails and the hard concrete remains of Sin City and decide where you would rather fight for survival and for your humanity!

I’d like to thank for Scott Alan Wade for the opportunity to read and review Midland.