Hyacinth by Abigail Owen (The Svatura, #2) 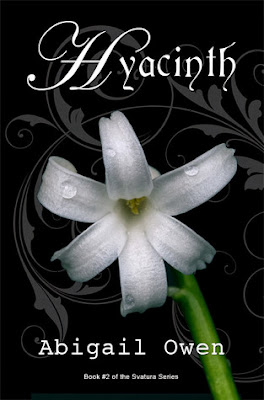 Overview:
Selene sacrificed everything when she took her brother’s place as ruler of the Vyusher, including her secret love for her one-time adversary Griffin Aubrey. When nightmares that are just a little too real start, Selene fears she’s turned into a cold-blooded killer…the monster that Griffin thinks she is.

My Review:
Abigail Owen takes us back to the world of the Svatura, beings who live far longer than humans and possess extraordinary powers from controlling fire to morphing into different creatures, to being able to transport to different locations in a flash! Hyacinth takes off from book one, Blue Violet in perfect harmony as more Svatura find their heart’s true mates and struggle with past differences among the different clans. Ellie and Alex have cemented and committed to their bond. Now its Griffin’s turn to discover his soulmate, and instead of being a joy to his heart, it brings him deep conflict, as he realizes his mate for eternity is Selene , the new queen of the Vyusher, the clan who not only killed his parents, but had attempted to wipe all Svatura off the face of the earth. Will his reluctance to even be I the same room with a contrite Selene keep them apart? Will Selene have to choose between her people and her heart’s desire? With all the dissension and the evil afoot, there are far more pressing matters at hand.