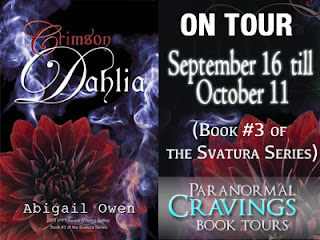 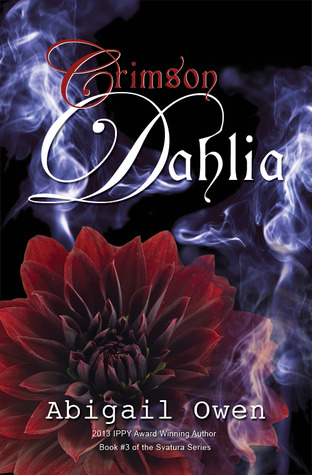 When Lila Jenner leaves her family and friends to start a new life for herself, Ramsey Pierce lets her go. Determined that the fire raging inside him will never harm her, he denies the magical bond that could be theirs alone.
When an old enemy resurfaces and Lila suddenly disappears, Ramsey realizes that he’ll do anything to win her back and keep her safe beside him. But Maddox, driven by a centuries-old quest for revenge, is stronger than they ever imagined. And Lila could be the key to his ultimate power.Friends and enemies must band together against this shared threat if any of them are to survive. Even then, they may all discover too late that one dragon is not always enough…

Available at:  Amazon
(Kindle version should be up in all countries Amazon reaches any second.)
Print @ Amazon.com – Coming September 2013

Crimson Dahlia is, like the first two books of this series, filled with the creative imagination of author Abigail Owen! As more of the Svatura fall to the pull of their soulmates, a huge battle is looming on the horizon. Will Selene, as queen of the Vyusher be able to rally the support of the Svaturi clans? Will they be strong enough to thwart the evil plans of their twisted enemy? What could make a man hate so much? Will good friends fall in battle? Will newfound powers be enough to save the castle and the lives of the innocent?
Told with as much feeling as the previous book of the series, Crimson Dahlia has stepped up the pace to a full run throughout this captivating Young Adult novel! While conflicts of the heart run high, the conflict to survive once again must take precedence. The tension is high, the emotions run deep and the will to win is strong!
Abigail Owen has given us heroes to cheer for, without a doubt! Strong characters and strong writing make this a joy to read and get lost in! 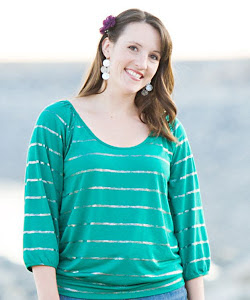 Award-winning author, Abigail Owen was born in Greeley, Colorado to a high school English teacher and a social worker. Abigail was raised in Austin, Texas and now resides in Northern California with her husband and two adorable children who are the center of her universe.

As well as being a wife and mother, Abigail is also a full-time business analyst – which oddly makes her a lover of both words and numbers. She is also in the middle of an EMBA program to help expand her business acumen. You could say that busy is an understatement!

Abigail grew up consuming books and exploring the world through her writing. A fourth generation graduate of Texas A&M University, she attempted to find a practical career related to her favorite pastime by obtaining a degree in Technical Writing. However, she swiftly discovered that writing without imagination is not nearly as fun as writing with it.

Abigail published her first book – Blue Violet – in August of 2012. In 2013 Blue Violet won Bronze in the Independent Publisher Book Awards (IPPYs) in the Sci-Fi/Fantasy/Horror eBook category. Abigail followed Blue Violet with the second book in the series, Hyacinth, in February of 2013. Abigail has many more series and books rattling around in her head, and plans to pursue this passion of writing for many years to come!


Other Books in the Svatura Series: 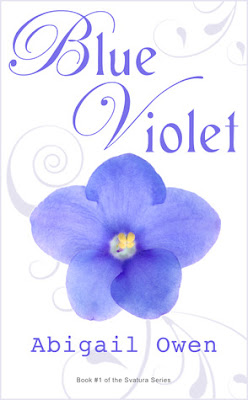 When Ellie Aubrey leaves her only remaining family and moves to Colorado, she knows she's risking her life. But she can't ignore the possibility of what she might find there. What she didn't expect to encounter was a bewildering connection to one smolderingly sexy Alex Jenner. But when Ellie's worst nightmare comes true and threatens to destroy everything she holds dear, she must fight to save those she loves most. Even if it means sacrificing herself by revealing a terrible truth... sometimes not all monsters are make believe. 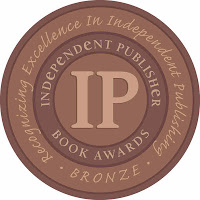 2013 Bronze Medalist for Best Sci-Fi/Fantasy/Horror eBook at the Independent Publisher Book Awards (IPPYs)
Blue Violet by Abigail Owen is a refreshing YA paranormal romance on the light and slightly innocent side. The first book of the Svatura Series, isn’t overly violent or full of tons of angst and tears, perhaps because, while looking like teens, the main characters are actually part of a supernatural race that ages very slowly. Ellie looks like a high school senior, but she and her brother Griffin are over two hundred years old. They are quite possibly among the last surviving Svaturi, so Ellie is determined to find and protect a group she has discovered living in a small town in Colorado. What she didn’t plan on was meeting Alex Jenner, or facing off against the powerful Vyusher clan, who were responsible for the slaughter of so many Svaturi, including her parents.

Abigail Owen has done a remarkable job creating a world that blends myth, magic and fantasy while creating characters that are truly “nice” in spite of their potential to be deadly if needed. Relying on integrity as opposed to might, using intelligence instead of rushing off half-cocked to “save the day,” Ms. Owens gives her readers positive role models for teens and any reader who enjoys urban fantasy. The romance was another well done subplot as there was no rush of passion, but a savoring build up that is meant to stand the test of time. Refreshingly, no triangles, no angsty clinging, no overbearing alpha male stuff, best saved for more adult reading.

This is a wonderful, relaxing read for all ages, with just the right amounts of fantasy, conflict and romance that makes this well-paced novel a joy to read and this series one to watch. I’m even recommending Blue Violet to my grand daughter! 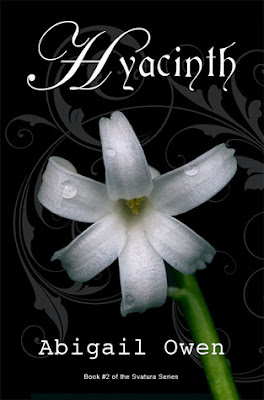 Hyacinth
Book #2 of the Svatura Series

Selene sacrificed everything when she took her brother’s place as ruler of the Vyusher, including her secret love for her one-time adversary Griffin Aubrey. When nightmares that are just a little too real start, Selene fears she’s turned into a cold-blooded killer…the monster that Griffin thinks she is.

Abigail Owen takes us back to the world of the Svatura, beings who live far longer than humans and possess extraordinary powers from controlling fire to morphing into different creatures, to being able to transport to different locations in a flash! Hyacinth takes off from book one, Blue Violet in perfect harmony as more Svatura find their heart’s true mates and struggle with past differences among the different clans. Ellie and Alex have cemented and committed to their bond. Now its Griffin’s turn to discover his soulmate, and instead of being a joy to his heart, it brings him deep conflict, as he realizes his mate for eternity is Selene , the new queen of the Vyusher, the clan who not only killed his parents, but had attempted to wipe all Svatura off the face of the earth. Will his reluctance to even be I the same room with a contrite Selene keep them apart? Will Selene have to choose between her people and her heart’s desire? With all the dissension and the evil afoot, there are far more pressing matters at hand.

ENTER BELOW FOR A CHANCE TO WIN AN eCOPY OF ALL THREE BOOKS!
a Rafflecopter giveaway
Posted by Dii at 12:00 AM