Fallen by Traci L. Slatton (The After Trilogy, #1) 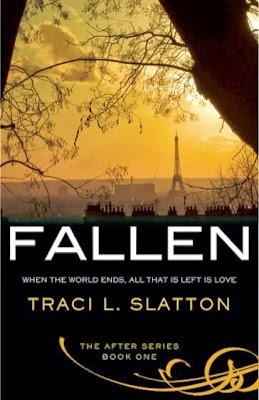 Overview:
When the world ends, all that is left is love....

As chaos descends on a crippled Earth, survivors are tormented by strange psychic gifts. In this time of apocalyptic despair, love is put to the test. One woman with mysterious healing power guides seven children to safety. Charismatic Arthur offers her a haven. Slowly Emma falls for him. But at the moment of their sweetest love, his devastating secret is revealed, and they are lost to each other. Will Emma stay with him?
The first in a romantic trilogy set during the end times

My Review:
A mysterious mist is devastating the world, humans caught in the mist are reduced to water and sand in an excruciating death. The survivors were left with little but their wits and luck in the cruel game of survival. True leaders are born who are not all bright and shiny, they are damaged, flawed and human, doing whatever they need to do to survive and provide relative safety for those in their care. Emma has been caring for a group of children in the months since the mist arrived, so when another band of survivors on horseback rescue them from the mist, she will do whatever it takes to join this group and keep the children safe and fed as she attempts to make her way to safety and her husband, thousands of miles away. Arthur, the leader of the group of men who rescued them seems to have some type of control over the mist, a power he has gained since the apocalypse. Others have also gained “powers,’ Emma can heal people; some have psychic abilities to read people and their intentions. Ask yourself, what would you do in order to survive? What would you expect of others?

Fallen by Traci L. Slatton, the first book in the After Series isn’t filled with the promise of a happy ever after. It is brutally dark, gritty and has a frighteningly realistic view of what a world-wide disaster could be like. The heroine didn’t start out damaged, but her determination to survive and keep those around her alive has caused her to do things she never would have dreamed of. Did it make her larger than life and completely likable? No, but Traci L. Slatton created her to be strong in a world filled with darkness, evil and people running scared. Emma does have a sense of loyalty, at time it seems skewed, but as I fell further and further into the story, I began to understand why, in a word - survival.
Arthur has secrets he is keeping, but as brutal and cold as he may seem, inside he has his own code of honor and a shroud of guilt he hides behind and he is falling for Emma. Should she tell him of her husband, who may still be alive?

Is the mist a product of nature? Science? Is it God’s wrath coming down on a power-hungry world? There are people who know the answers, people who seek retribution, who will pay the price?
Traci L. Slatton has stamped Fallen with her own style of writing, bold, thoughtful and driven by the characters as much as the plot. It is a story of survival in a world that seems doomed to succumb to the dark side. I was riveted to each dark page as my imagination went into overdrive ferreting out what I would do. This is not a traditional romance, so do NOT expect hearts and flowers, but do expect a story that will stay with you in that realm of “what if” long after the last page.

I need to thank the author for a review copy of Fallen in exchange for my HONEST review.