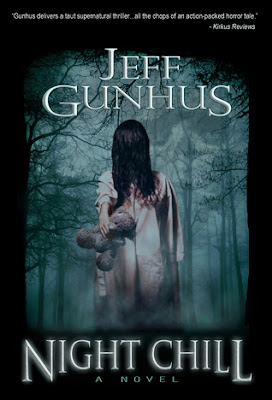 Overview:
Jack Tremont moves his family to the quiet mountains of Western Maryland hoping to leave behind a troubled past and restart his life. Instead, he finds himself caught up in a nightmare when his daughter Sarah is targeted by Nate Huckley, a mysterious and horrifying stranger driven by a dark power that will stop at nothing to possess her. When Sarah goes missing, suspicion falls on Jack and he must uncover the secrets of the small mountain town of Prescott City and face the evil secret hidden there. As he digs further, he learns the conspiracy reaches more deeply than he could have imagined. Finally, he will have to face the question, What is a father willing to do to save his child? The answer? Anything. Anything at all.

Night Chill by Jeff Gunhus is a dark tale of one family’s twisted journey through a nightmare of epic proportions as they become the victims of deceit, treachery and the quest for eternal life at any cost. Something is special about Sarah, one of Jack and Lauren’s young daughters and there are those who will stop at nothing to capture and use her for their nefarious purposes. What evil lurks in this small and seemingly quiet town? What demon has one crazed scientist unleashed and why does it want Sarah? Their nightmare began on a dark and stormy night, but how will it end?

Jeff Gunhus starts off fast and doesn't let up, from page one, I was baited, hooked and reeled in completely. Part mystery, part thriller, part sci-fi AND part paranormal, fast-paced, intense, what’s not to like? The characters were intense, detailed and their pain, terror and confusion felt real! I had to relax my death grip on my Kindle, I was that involved, hanging on every word, action and event as I was taken from an innocent car ride into the bowels of an underground scene from Hell. And the ending? It could have gone a couple of different ways without a doubt, but I have to say, I was not able to second guess the author, brilliant!

I received this review copy as part of the NIGHT CHILL Virtual Tour and Giveaway stopping at Tome Tender October 20, 2013.