The Crashing of Heaven and Hell by Dennis Spielman 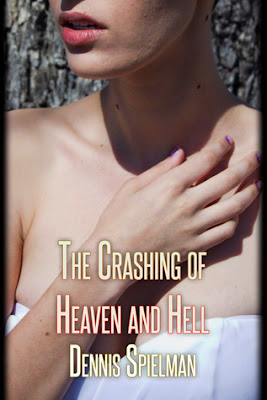 The Crashing of Heaven and Hell
by Dennis Spielman

Overview:
It was so beautiful, yet so terrible, to see the crashed islands of Heaven and Hell naked on the planet’s surface. To blurt out how and why would be a great insult to everyone involved. To be truly enlightened, or entertained if you’re an Atheist, you must know the series of events that happened on the day Heaven and Hell came crashing down. Follow the normal lives of several people on the Green Planet as they deal with vengeful actors, kidnapping robots, making a documentary, a disappearing moon, scavengers in space, a zombie rights protest, and the Gods’ schemes to cause the planet’s heaven and hell to crash on the surface. Take an amazing journey on Hell’s wicked roller coaster, fly with angels in heaven, shop in a futuristic mall in the shape of a crystalline horse, run from a giant three headed dog on a hover board, meet some fascinating people, and get involved in the Gods’ drama in Dennis Spielman’s book, The Crashing of Heaven and Hell

Leave all of your preconceived notions of Heaven and Hell at the door, but do hang on to your sense of fantasy as you enter the universe created by Dennis Spielman in The Crashing of Heaven and Hell. Two young lovers get caught up in a bizarre series of events through an act of human concern and kindness. They have become pawns in a battle of the gods as a plot unfolds to unleash havoc on the Green Planet (one of five planets in another star system named by color.) Heaven and Hell are “islands” shrouded from the eyes of the living, what would happen if they were both brought together, and this tale is narrated by the God of Egos as he watches Virus and Jet take on supernatural forces intent on playing with fate. One will become a force to be reckoned with, one will be the catalyst for that change. Will the Green planet be saved from insanity? Will the islands of Heaven and Hell return to their rightful places? Are Heaven and Hell what our minds envision them to be?

The day Dennis Spielman was born, there must have been a generous helping of imagination dished out, because the world he has created can only be related to our reality in a very general way! Virus and Jet are completely likable, actually seem very “normal” and most definitely have grown to their full potential, one becoming something far greater and more powerful than a mere mortal! I pictured myself using Ego’s eyes to see the events unfolding, until it almost seemed normal to talk with a gorgon, pet Cerberus and see the guy in the potholder suit walking down the street! Did I mention the vampire, who cleared up a few things about vampire culture, myths and mysteries? there is no point A ending at Point B...the reader will travel through a maze of characters, twists and turns before arriving at"The End."

As I read, I began to feel I was seeing a message in this farfetched tale, I could be wrong, but its extreme stretching of plausibility in this fantasy world seemed to mirror some of the excesses of "our reality." Or was that a result of my own imagination on hyper-drive?

I read to be entertained and even to think/learn in the process, and Dennis Spielman did amuse me with his far out events, people and descriptions! Is this mainstream fantasy? Probably not, but there is a niche for it and I’m sure Mr. Spielman’s fan base will swell! If you are looking for something off the beaten path, cleverly written, with some snarky dialogue, a strangely foreign world and quirky characters hiding a possible deeply hidden message about our society's state? Its all there in The Crashing of Heaven and Hell!

I received a review copy as part of Dennis Spielman's The Crashing of Heaven and Hell Virtual Tour and Giveaway stopping at Tome Tender October 28, 2013.