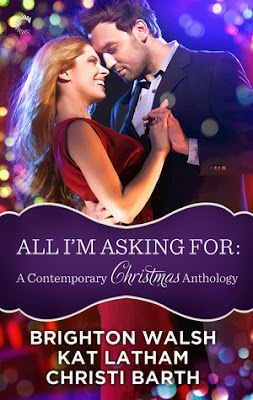 This Christmas, the producer of a small town holiday spectacular is swept away by a handsome Hollywood director. Being stranded in a snowstorm offers a couple a second chance at a future together. And an American in London helps a brooding Brit put the ghosts of Christmas past behind him.

Wherever you are, however you celebrate, this collection of three festive novellas will bring warmth to your holiday season.

My Review:
All I'm Asking For by Christi Barth, Kat Latham and Brighton Walsh
Three warm Holiday love stories from three amazing romance authors! All I’m Asking For is a sparkly romance anthology for Chick Lit readers everywhere with a short story from Brighton Walsh, Kat Latham and Christi Barth! With these three masters of contemporary swoon-worthy and heart-squishy tales of love, the only thing missing from this escape is the gentle snow falling and the fire roaring in the hearth.

Tinsel My heart by Christi Barth is a tale of second chances for two high school friends when they reconnect years later. Becca has produced a an over-the-top Christmas play for years, but when the director is a no-show, his partner glumly takes over the commitment, bringing him back to a tiem and place he would rather forget. Jack always loved Becca, but could never tell her and ruin their amazing friendship, he never knew Becca felt the same, but will the Scrooge in Jack ruin any chance he has to win Becca now?

Delightful, heart-warming and just plain fun, with a cast of characters ranging from the hot Holly wood producer to the goat in the props barn, Christi Barth does love and the Holidays proud!

Brighton Walsh’s contribution, Season of Second Chances is just that, when Claire is stranded at a Chicago airport, due to blizzard conditions on Christmas Eve, the last person she expected or even wanted to see was Logan. He was the man she was supposed to marry, who was supposed to place her at least in the top two places in his heart, but she never rated above his need to succeed, to make a name for himself. With nowhere else to go on what was turning out to be a terrible Christmas, Claire accepted Logan’s offer to stay at his house until she could get a flight out. Can they get past their history and become friends or will Claire’s heart become a traitor, and send her on another journey filled with hurt and regret? Has Logan changed or will everything else always come before Claire?

Brighton Walsh takes a common theme in the “real world” and turns it into a tale of taking chances, of righting old wrongs and learning from past mistakes, all in the name of love.

Mine Under the Mistletoe by Kat Latham proves that love during the Holidays can be universal as Ashley, takes off for a London holiday, swapping her sunny California digs for the stately confines only a wealthy Brit could own. But, when she awoke after an exhausting journey, she was not alone. Next to her was a naked man, a beautiful naked man, great as far as dreams go, but a little harrowing in reality. Oliver was supposed to be in sunny California, but the frightful weather caused Heathrow to shut down until further notice. Where else would he go but home, to his own bed? How was he to know it was already occupied, by a beautiful blonde with a mean right hook?
Cute, clever and sweetly romantic, Holiday love across the pond will make your heart flutter as Oliver does his best to charm the panties off Ashley!


I received a review copy as part of the All I'm Asking For Virtual Tour stopping at Tome Tender November 29, 2013!
Posted by Dii at 10:03 PM