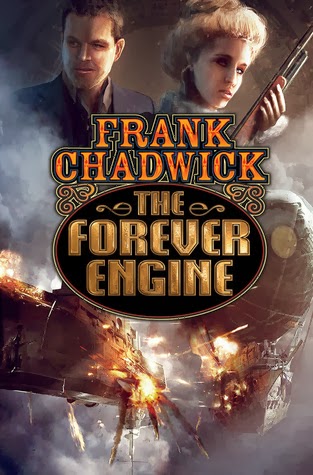 Original Trade Paperback. The exciting debut of a steampunk masterpiece from legendary game author and creator of the staple steampunk role playing game, Space: 1889. The stunning unveiling of a perfectly formed steampunk past, from an author who helped define the genre.

London 1888. His Majesty’s airships troll the sky powered by antigrav liftwood as a cabal of Iron Lords tightens its hold on a Britain choked by the fumes of industry. Mars has been colonized, and clockwork assassins stalk the European corridors of power. And somewhere far to the east, the Old Man of the Mountains plots the end of the world with his Forever Engine.

Enter Jack Fargo. Scholar. Former special forces operator in Afghanistan. A man from our own near future thrust back in time—or to wherever it is that this Brave Victorian World actually exists. Aided only by an elderly Scottish physicist, a young British officer of questionable courage, and a beautiful but mysterious spy for the French Commune, Fargo is a man on a mission: save the future from irrevocable destruction when the Forever Engine is brought to full power and blows this universe, and our own, to smithereens.

About The Forever Engine: "An alternate universe story full of action and political intrigue in the great tradition of Keith Laumer's Worlds of the Imperium. It'll probably be labeled "steampunk," but this is the all-too-rare kind of steampunk where the coal dust is black and gritty, engines run hot and stink, steam boilers are dangerous, and blood-spilling isn't the least bit Victorian."–Eric Flint, New York Times best-selling alternate history master, creator of the Ring of Fire series

The Forever Engine by Frank Chadwick

The Forever Engine is a steampunk adventure to an alternate dimension. Stranded in an another reality, American Jack Fargo fights to survive, struggles with unfamiliar politics and return to his daughter. The story is gritty and raw and the lines between friend and foe blur. Sometimes the actions were over described, slowing the stories pace but over all I found The Forever Engine a wonderfully dark romp into a fabulously undiscovered steampumk world.

I received an ARC copy of The Forever Engine from Baen Books in exchange for a honest review. This book is set for publication January 7, 2014.