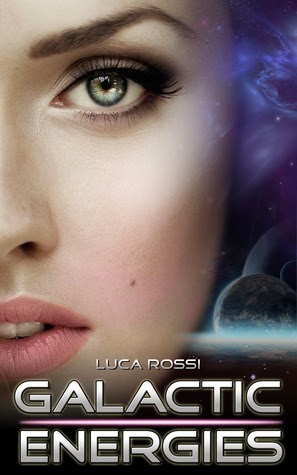 Overview:
The artificial intelligences of DataCom are trying to save the planet… by exterminating the human race. Aurelia finds her perfect man: a robot. The space explorer Captain Arcot sacrifices his life for an impossible conquest, the heart of Vril the vampire queen. A shape-shifting mutant ignites the erotic desires of the galactic police officer who's been tracking her down. Alessio fights against corruption in a universe of his own creation. An innocent man is forced to submit to the domination of a ruthless prison director. A king who's forgotten his own past wanders through a magical dimension where he discovers his own history. Two souls separated after one abandons the other meet again in another life. In an exciting virtual reality game, the hunter of the fearsome black widow becomes her prey.

Luca Rossi’s collection of short sci-fi/fantasy tales, Galactic Energies combines the wonders of technology, far advanced from today’s standards, human nature and the world of “what if,” in future times. Will election campaigns be conducted over the internet? Will orgies be holographic image offerings? What about celebrities, will they really make appearances or will their computer counterpart stand in for them? Is love possible with a robot? Will computers make life better for humans or will their objective become making a better world, eliminating humans and their desecration of the planet? If nothing else, each short story will spin around in your head as the possibilities for the future are endless!

Well written with wonderful detail, Luca Rossi’s Galactic Energies is fast-paced, entertaining and easily read, one story at a time, a perfect way for sci-fi newbies to test the waters and diehard fans to get their fix! Each story is intriguing, unique in its own way with crisp and imaginative writing.