LOVE in TOUCH by Lucy May Lennox Bookend Tour & Giveaway! 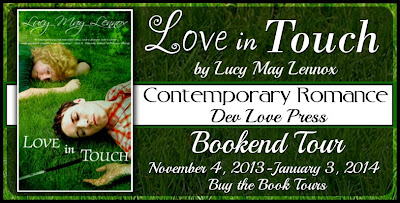 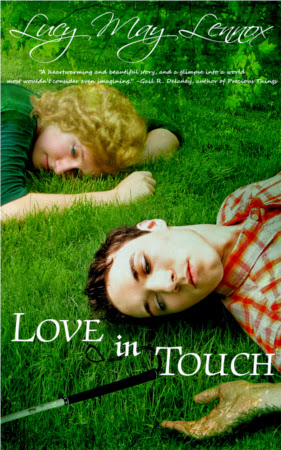 LOVE in TOUCH
By Lucy May Lennox

Kassie has felt adrift ever since her dad died when she was in college. Now 24 and living in Seattle, she gets interested in learning sign language through her roommate, a sign language interpreter. One day at a Deaf community event, she sees a young man sitting off by himself. Kassie feels compelled to try signing to him–the fact that he’s strikingly handsome doesn’t hurt.

Jake has been deaf and blind since birth. His disability has cut him off from the world, but beneath his isolated exterior, is a smart, sweet guy with a dry sense of humor. Despite the odds, he’s highly educated, but at 26, he’s gotten stuck in a rut, with few friends and no clear career plans. Until a sweet-smelling girl introduces herself to him unexpectedly, and opens up a whole new world to him.
Jake is more intelligent, more genuine than anyone she has met before, and for the first time Kassie starts to feel like her life has some direction. But as their friendship deepens into something more, the difficulty in communicating with each other only grows, and it seems like everyone they know thinks their relationship won’t work. How can they come to a deeper understanding of each other, and find a future together?


I've been doing a lot of guest posts on writing and on disability issues. If you're interested, check out the links on Dev Love Press.


For today, I thought I'd do something a little more personal and list some of my favorite things.


Favorite food: There's a lot of food in Love in Touch, and it's no accident. I love to cook, but actually my husband is a better cook than I am (so lucky, I know!). What I really enjoy is baking--bread, cake, pies, cookies, I love it all. My favorite food both to make myself and to eat is chocolate chip cookies. It's the perfect combination of flavors: sweet, salt, butter, vanilla, chocolate. I crave them all the time. OMG, I'm getting hungry even writing this.


Favorite city: Seattle, duh! I'm a big city type. I love how Seattle has all the features of a big city but with a friendly, laid-back attitude. And it has the most beautiful views. The sunsets are stunning--every night it's like a gorgeous oil painting.


Favorite trip: I was lucky enough to spend a week in Paris a few years ago. The food was incredible (are you sensing a theme yet?) I couldn't get enough of the bistros and cafes.


Favorite music: I love opera, especially Mozart. Operas were the blockbuster movies of the 18th and 19th centuries--exciting, fantasy entertainment for the masses. It's too bad some modern productions are stodgy and dull. It doesn't have to be that way!


Favorite fiction genre: Historical fiction. Specifically 18th century London. Look for something along those lines from me next!

About Lucy May Lennox

Lucy May Lennox is a lifelong resident of the beautiful Pacific Northwest. Her first ambition in life was to become a child actor, but when she grew too old to be an adorable prodigy, she turned to writing instead. A connoisseur of novels featuring men with physical disabilities, she grew frustrated with all the cliches, ignorance and stereotypes and decided to write her own positive take on disability. In addition to writing, Lucy also enjoys cooking and gardening, and is an amateur opera singer.

ENTER BELOW TO WIN
An eBook Copy of LOVE in TOUCH By Lucy May Lennox
An Amazon $25.00 Gift Certificate