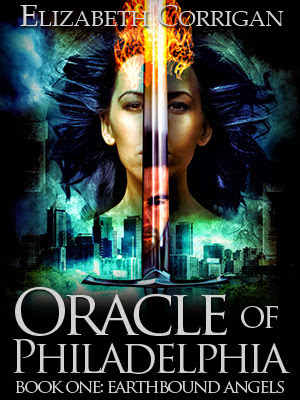 Oracle of Philadelphia
by Elizabeth Corrigan

Overview:
Carrie works at a diner in South Philadelphia, dispensing advice to humans and angels wise enough to seek her counsel. But there are some problems that even the best advice can’t solve.

Her latest supplicant, Sebastian, is unique among those who have sought her aid. He sold his soul to a demon in exchange for his sister’s life, but his heart remains pure.

Carrie has lived for millennia with the knowledge that her immortality is due to the suffering of others, and she cannot bear to see another good man damned when it is within her power to prevent it.

In order to renegotiate his contract, Carrie must travel into the depths of hell and parley with the demons that control its pathways. As the cost of her journey rises, Carrie must determine how much she is willing to sacrifice to save one good soul

My Review:
Oracle of Philadelphia by Elizabeth Corrigan

It’s said that we pay for the sins of our fathers, for Carrie, she is paying for the deal the town fathers made a millennia ago. As a child, her ability to read thoughts and see one's soul's intent became a bargaining chip between Lucifer and the short-sighted and selfish desires of the town council. She unwillingly lost her soul and became immortal, at the price of the lives of people she loved. Fast forward to contemporary times, she is still burdened with guilt by this unwelcome “gift.” When the chance to redeem another pure soul from a foolish act done out of love arises, she is compelled to do whatever is necessary to save Sebastian from eternal damnation. Get ready for a few trips to Hell and back, a few wonderfacts regarding angels and demons and a very creative read that flows at an easy pace.

Oracle of Philadelphia by Elizabeth Corrigan, the first in her Earthbound Angels series takes the reader back through time and Carrie’s many names and lives as her gift brings her in contact with angels, demons, fallen angels, and the minions of Hell. I liked Carrie, she has been hurt by her past, but lives under the radar for the most part as a restaurant owner in Philadelphia. Her friends are few, but they are loyal immortals, one a most angelic angel, and one a demon who will have you laughing out loud at his antics, his banter and his eclectic diet! Bedlam, yep, that’s his name, deserves his own book, because under all of his antics, his love of chaos, he is a good demon and an awesome friend! Gabriel, the angel, is all light and love and I was sure Carrie should end up with one of these two characters…maybe she will!

Let’s not forget Lucifer, the only other being with Carrie’s power, and Michael, wow, never thought an angel could be such a jerk! Great story, great characters and a great foundation for this series! Not too dark, or edgy, Oracle of Philadelphia was a pleasant surprise with some great lines, great moments!

I received a copy from the author and her publisher in exchange for my honest review.