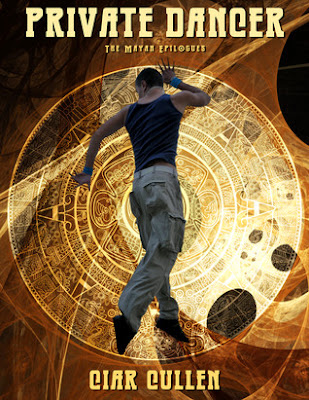 Overview:
Book One of the Mayan Epilogues: At the end of time and deep in the Mayan jungle, a Sergeant’s cold heart is melted by an enchanting recruit.

After “The End,” Sergeant Cliff Roman’s rag-tag unit trudges in the sweltering heat on a pointless mission. One in three people worldwide has already died of the virus, but troops are sent to likely hotspots to collect biological samples.

In the shadows of Mayan ruins, Private Dustin Huang is a fish out of water, drafted into hell. A skilled, artful ballet dancer, Dustin finds a little solace in the enticing form of his Sergeant.

Death itself seems to stalk the unit as they near the purported entrance of Xibalba, the Mayan Underworld. But a royal presence from antiquity intervenes to help save the mortals and usher in the next cycle for humanity. What mysterious force pushes Cliff and Dustin together?

Adult-content rating: This book contains content considered unsuitable for young readers 17 and under, and which may be offensive to some readers of all ages

3.5 Stars - When a world-wide disaster strikes, a virus decimates massive numbers of the population, Mexico has been annexed by the United States and is under martial law. Military forces are brought in to try to keep order, but not all are cut out for that life, and if you were able-bodied, you were enlisted, one way or the other. A former ballet dancer is physically healthy, but not emotionally equipped for what he must endure as a soldier. Can his commanding officer give him the strength he needs to continue in the Mayan jungle as they search for ancient ruins that may hold the secret to a cure?

Private Dancer by Ciar Cullen lays a detailed foundation for further novellas in this series, and has the potential for being a full blown novel on its own! As a short read, it could be overpowering at times, but perhaps that was because the end was coming soon? Ms. Cullen has built a world that is crumbling in around itself with very human and very flawed characters who are together out of need, as opposed to desire in a nightmarish situation. I would definitely have liked to have seen more story to help absorb the information provided.