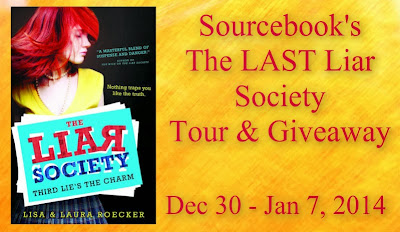 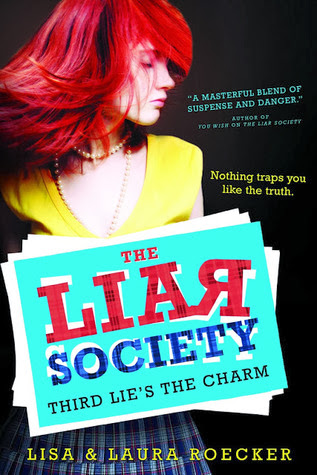 Kate Lowry is sick of the lies, sick of the secret societies that rule life at Pemberly Brown Academy. Welcome back to Pemberly Brown, where there are secrets so big people will do anything to protect them…
For more than a century, the secret societies at Pemberly Brown Academy have been at war. The Sisterhood and the Brotherhood will do whatever it takes to make sure they have ultimate rule, and witty Nancy Drew-esque heroine Kate Lowry is determined to bring them to justice. It’s the least she can do after the societies killed her best friend freshman year. The only way to take down the Sisterhood is from the inside… but once Kate starts experiencing the perks of being a member, will she still want to take them down?

Dii's Review:
It's a wrap!!  The final book in the Liar Society Trilogy puts a wrap on the series and brings some closure for Kate, our narrator and determined teen guide throughout the series. Kate feels the pressure to end the society once and for all as the death toll mounts and she feels the sting that maybe she could have prevented what happened. While life goes on around her, Kate seems focused totally on ending the society and avenging the death of her best friend. Her love life seems as disjointed as everything else as she finds herself attracted to both Liam and Bradley, but not really being involved enough to make a choice, which may cost her, are they both trustworthy or is there more to them than meets the eye? There is too much going on, too many mysteries to solve and life’s pressures seem to show up through her narration. Will she rid the school of the evil it secretly harbors?

Third Lie’s the Charm by Lisa and Laura Roecker is filled with all of the ingredients for YA bliss, some humor, some mystery, a lopsided romantic triangle, tons of angst. With believable characters who come across as teens in turmoil, they have created a fast-paced world that reaches its crescendo from an unpredicted quarter that will keep the reader guessing until the end!

*Kate rushes into the coffee shop where we're interviewing her a few minutes late, flushed but happy. Her eyes scan the room and finally land on us and we wave her over. Her hair has grown longer in the past few months and the stripes of color have all but faded. It almost appears as though the old Kate has returned, the "before Grace" Kate. And yet anyone can tell that this Kate is older and has an edge that only time can chisel. And that she's happy.

Hugs all around, hellos, you look greats and we're off. Kate sips her venti full-fat, full-sugar mocha frappuccino with extra whipped cream gratefully.

Kate: *blushes and smiles* Great. He's great. I'm actually meeting him after this. He's organized a surprise date for our four-month anniversary. Liam is everything I never realized I wanted. I've had crushes and boyfriends and boys who are friends and all that, but Liam is different. He's patient and loving and thoughtful and knows exactly what I need before I even know. And it doesn't hurt that he's really pretty to look at. I think Grace would approve. *Kate lowers her head for just a beat when she says her best friend's name.*

L&L: This all began with Grace and we know she's hard to talk about. But can you talk a little about what made your friend so special?

Kate: *Kate takes a long sip before beginning and we can't help but notice the immediate shine in her eyes.* I met Grace in kindergarten. I was crying because I missed my mom and dad (imagine that) and some of the boys were calling me a baby. Grace pretended to trip with a crayon in her hand and colored across one of their coloring pages. The boy immediately burst into tears. She flashed me a smile and I wondered if maybe kindergarten wasn't so bad after all. From that moment on, we were inseparable. Maddie moved to town by the end of first grade and we became a threesome. Grace added all the life to every party and could always make you smile. She was sarcastic and hilarious and always bending rules. But when it came to the important stuff, she always knew exactly what to say or do to make everything right. She would have done amazing things. *Kate quickly wipes her eyes and offers a hesitant smile.*

L&L: And what about Seth?

Kate: *Her eyes soften immediately upon hearing his name* If Liam is everything I never realized I wanted, Seth is the friend I never knew I NEEDED. He'll drive you crazy, make you laugh and make you feel a million times better all in a span of five minutes. He's seriously the brother I never had. He and Maddie are adorable together and the four of us hang out a ton. Every so often we'll climb up to his treehouse for old time's sake and he'll tell me his latest conspiracy theory about the new family down the street or the oldest teacher at Pemberly Brown. *She shakes her head and smiles.* He's just…Seth and he's the best.

L&L: We know you had a thing for Bradley and some readers were disappointed that Liam won your heart in the end. Where's Bradley now and do you still talk?

Kate: Bradley is where I was two years ago, minus the pink hair. He's lost his best friend and there's absolutely nothing that will make that go away. Not even finding who was responsible. Because none of that really matters. I didn't realize it at the time, but punishing someone for destroying your life and killing your best friend will not make him or her come back. Bradley has to figure all of that out on his own. No one can do it for him. It never would have worked for us--we might have lasted a few months, but I really believe everything would have led me back to this exact spot. Fate? *Kate raises her shoulders and shakes her head.* I don't really know what it is, but either way, it's pulling all of us in very specific directions. I kind of think Grace is pulling some strings for me. *She smiles slightly.*

L&L: Were you shocked about Cameron's reappearance and Porter's involvement?

Kate: *Raises her eyebrows.* Yes and no. I honestly don't blame either of them. Grief makes me people do really crazy things--crazy good and crazy bad. Cameron's actions after Grace died were borderline obsessive. I think he's getting the help he needs now. I know that's all Grace would have wanted.

Kate: Only good things. Liam and I are in a really good place and I finally feel like I can hear Grace's name without feeling like my lungs are collapsing. *She lifts a strand of her brown hair and raises her eyebrows.* See? I even look like the old me. But really. I feel…complete. And I know Grace is responsible for at least a part of that. *She looks up and sighs.* I mean, I have the best guardian angel in the world, so there's that. 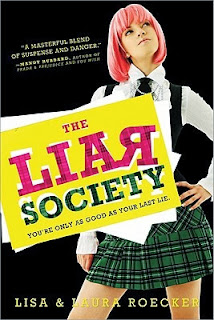 The Liar Society  - Book One

Kate Lowry didn't think dead best friends could send e-mails. But when she gets an e-mail from Grace, she’s not so sure.

Now Kate has no choice but to prove once and for all that Grace’s death was more than just a tragic accident. But secrets haunt the halls of her elite private school. Secrets people will do anything to protect. Even if it means getting rid of the girl trying to solve a murder... 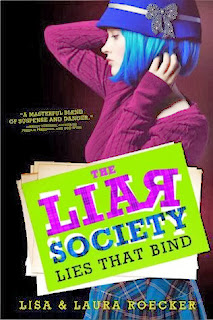 Just when Kate Lowry thought she had life at elite private school Pemberly Brown figured out, she cracks open a fortune cookie to find a message from her best friend Grace--who's supposed to be dead.

A classmate has gone missing, and Kate soon realizes that the disappearance is tied to the secret societies that rule her private school. Her best friend died for their secrets, and there's no way she'll let them get away with it twice. It's up to quirky outsider Kate to get some answers, but in a school where every answer leads to more questions and nothing's as it seems, who can she trust? 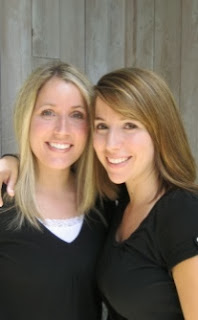 Lisa & Laura Roecker are sisters-turned-writing-partners with a love of all things Young Adult. Some call it arrested development, but the sisters claim it keeps them young. Plus, it’s cheaper than Botox. Lisa and Laura live in Cleveland, Ohio, in separate residences. Their husbands wouldn’t agree to a duplex. The Third Lie’s the Charm is the third novel in their Liar Society series.

Lisa Roecker attended Miami University with a double major in Marketing and English Literature. She graduated and took a deeply boring job that paid the bills. Eventually she started writing with her sister to keep things interesting.
Laura Roecker fell in love with books because her big sister said she should. She graduated from the University of Dayton with a degree in Middle Childhood Education. After teaching for several years, she finally realized her dream when she found a writing partner in her sister.

ENTER TO WIN A COPY OF THIRD LIE'S THE CHARM FROM SOURCEBOOK
- U.S./CANADA ONLY-