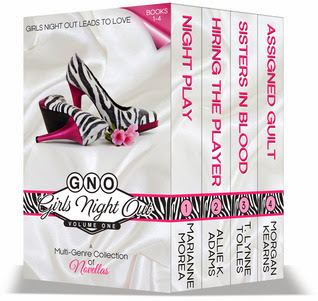 
Overview:
Baby, it’s cold outside! So how about a Girls Night Out to heat things up? Bestselling authors, Allie K. Adams, Morgan Kearns, Marianne Morea and T. Lynne Tolles have joined forces in a Girls Night Out themed four-pack of sizzling stories! Bundle up with this hot combo of contemporary and paranormal novellas guaranteed to spice up your Holidays Season!

Here are the Bestselling Authors and their Titles:
Allie K. Adams - Hiring the Player - Campus Players #2
Kayla is about to graduate and doesn’t have a single college experiment story to her name. After a crazy Girls Night Out, her best friends hire Jake, a player, to grant three wishes they want for her. He’s more than happy to show Kayla how to have a little fun.

Morgan Kearns - Assigned Guilt, Deadlines & Diamonds #5.5
A guilt trip and a promise of fun have Stephanie McCallister dressing up for Girls Night Out. But a brand new club leads to an adventure teaching her an entirely new meaning of “fun”.

Marianne Morea - Night Play, Cursed By Blood 1.5
After running from an arranged marriage, Emily Leighton is finally home…and what better way to celebrate than a hot night on the town with friends? The full moon turns up the heat on a one-night stand, giving Emily a glimmer of possibilities she’d rather not face. His name? Ryan.

T. Lynne Tolles - Sisters in Blood, Blood #6
A Bachelorette weekend in Las Vegas to celebrate the upcoming nuptials of Katarina, Rowan and Melanie allows the women of the Blood series a well deserved break to unwind with the ladies that have become more than family - they're Sisters in Blood

Love short stories? Love stealing away for a sweet taste of romance, from the paranormal to the just plain smokin’ hot? Girls Night Out an anthology highlighting some amazing authors reads fast, fun and oh so sexy! Marianne Morea, T. Lynne Tolles, Allie K. Adams and Morgan Kearns have gotten together for their own version of Girls Night Out adding some heat to a cold winter’s night and sharing some characters from some of their best-selling series. Four authors, four stories, four opportunities to raise your heart rate while you escape into reading bliss!

Marianne Morea teases with Night Play, a crazy girls night out with a paranormal bite. Few too many drinks, a little craziness, (okay a little bar brawl) and a hot cop named Ryan to-the-rescue equals instant attraction for shifter Emily, who has an “arresting” time between the sheets!

Allie K. Adams’ Hiring the Player turns one hot Firefighter and his cute-yet boring neighbor into a couple on fire as he accepts a dare and finds far more than he bargained for in the process! Warning: Keep a Fire Extinguisher handy.

T. Lynne Tolles gives Las Vegas a bachelorette party to remember with Sisters of the Blood. The trip there lets the girls get to know each other better, a little airport incident here, a little gambling incident there, a few revelations and bonds are formed that can’t be broken!

Morgan Kearns’ addition is Assigned Guilt, the tale of what happens when two girls are in the wrong place at the wrong time and end up on the wrong side of the law, all for a girls night out. Will time in a police holding cell be a story to remember or forget, or will Stephanie’s knight in shining armor save the day?

Light reading with a bite, a pinch of magic and just plain fun! I received a review copy as part of the Girls Night Out Book Blast!