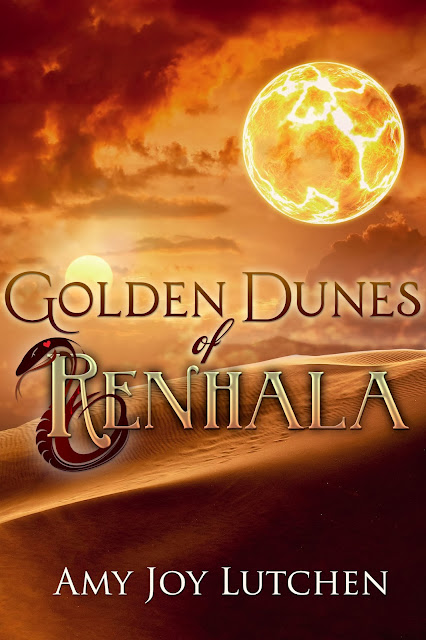 Kailey Rooke, karmelean, and now a possibly unethical karma-for-hire, has spent the past year jumping from project to project without any real hope for salvation. With repercussions from her actions at every turn, she discovers that as time goes on, she loses a bit more of herself to that which feeds on her anguish--that which is thriving inside her own body.

When a new contract to find a missing girl arises, Kailey attempts to put her past and its associated problems on the back burner, but she soon finds out that treachery and deceit lie shortly ahead in Golden Dunes, only giving face to new problems, with one leading right back to her childhood past.

She struggles to complete her contract as her own life teeters on a fulcrum, constantly tipping according to karma’s whim. How long will she keep her balance? Which way will she fall?

You can find Golden Dunes of Renhala on Goodreads

Some information about the first book in this series: 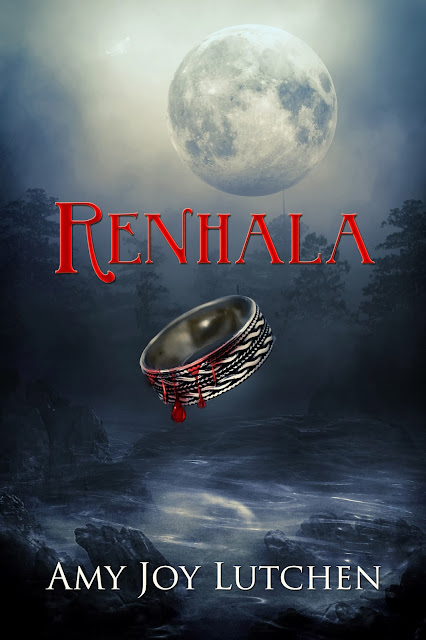 Blurb:
Kailey Rooke, timid accountant dedicated to philanthropic work, finds herself spiraling into a deep depression after she suffers a horrifyingly odd and humiliating assault, to only discover more of these freakish assaults occurring across the globe.
A chance discovery leads Kailey to a meeting with elderly Gunthreon, actual master of persuasion. Gunthreon, who seems to know too much of Kailey's history for her liking, opens Kailey's eyes to a coexisting magical realm she never knew existed: Renhala, while entrusting her with the knowledge of her newfound power as karmelean, serving as a beacon to the Higher Ones. She soon discovers that Renhala is in danger, and this danger has been leaking into her own realm. As she uncovers secrets within herself, and attempts to toughen up, she fuses with an unlikely band of fellow travelers/creatures, falls into an unexpected love triangle, and finds the courage to master a new deadly weapon.
As blood is shed and puzzles near completion, Kailey pulls from deep within herself, conjuring up mystical qualities that enable her to astonish as once predicted at her birth, but despite the newfound strength, Kailey will discover that monsters not only come in ugly packages, but can be easily disguised as those she has come to love and trust.


You can find Renhala on Goodreads

You can grab your free copy of Renhala here:
- Amazon
- B&N
- Kobo
- Smashwords

About the Author:
Was born in Chicago and slept in a dresser drawer for the first few weeks of my life, marking me as a future claustrophobe.

I studied at the University of Illinois, Champaign-Urbana (man I grew up quick), where I became a number, but decided it was a good number.

I write with plenty of snacks in hand, making sure they are not in multiples of three. That number makes me nervous.

Author of the Renhala series.

1. Favorite book? Ugh. WHY? I have to pick a favorite? It all depends…The one that Neil Gaiman wrote. Oh, and that other one by Stephen King. And anything with the words: Anita and Blake in it.
2. Favorite movie? Definitely Charlie and the Chocolate Factory. “I want the world…I want the WHOLE world…” Oops, sorry. I got carried away.
3. Favorite song? “I want the world…I want the WHOLE world…” Wait, no. It’s actually Enjoy the Silence by Depeche Mode.
4. Least favorite subject in school? History. I even hate saying that word. I remember only one fun day in history when we made giant maps of the US outside and…wait, that was Geography.
5. Superpower that you've always wanted? I’ve always wanted to read people’s minds. What’s that? You think my shirt’s ugly? Well I outta…
6. Favorite TV show? Current: Adventure Time (I’m a kid trapped in an adult’s body). Past: Fringe.
7. Favorite ice cream flavor? Anything with rainbow sprinkles on it.
8. Boxers or briefs? Boxers, for sure. Silky ones and I’m all yours.
9. Email or handwritten letters? E-mail. So sad to say, but I rather see exactly what you are trying to get across rather than guess if a letter is an “I” or an “E”.
10. Dogs or cats? Dogs. Puffy-eyed spotted puffer fish is not a good look on me.

Excerpt #1:
“So where did Bu run off to?” I say, quickly changing the subject. “He’s got to be as hungry as I am, or more so. I’m surprised he hasn’t smelled it already.”
Lupa, with her mouth full of gooey cheese and vegetables, says, with her finger pointed, “You’ll find Bu down that hall, through the door on the right. It will have an aquarium scene carved into it, and beautiful work, I must say.” She keeps chewing, drooling a bit out of the left side of her mouth, but she catches it skillfully with her napkin.
“SharkBoy?”
A nod is all I get as she gulps her fruit punch.
“Do you mind if I come, too?” Conner’s plate is already empty, and he stands with his hands in his pockets, looking cute and innocent.
I can’t help but allow him to follow. “Sure.” Jenna doesn’t even know what’s going on around her—her pizza is untouched—because she’s still playing with my phone. My cell phone bill will definitely be checked with more gusto come next month, because I wouldn’t be surprised to find a cross-country call to 123-456-7890. “Jenna, call this number and ask my mom if she wants to come over and hang with us.” I write down her number and slide the paper in front of her.
I pile on my plate two more pieces of pizza then go grab a few anchovy pieces for Bu. I decide to put his in a plastic Ziploc I found on the counter because I don’t want any of his anchovies touching any bit of my pizza. Conner grabs one more piece for the road as I shove the baggie in my pocket.
As we walk, Conner clears his throat. “You know, the stupid bickering we’ve been doing is going nowhere. Let’s start from scratch.” The apology—or at least that’s how I’m taking his words—releases tension in my shoulders that I didn’t even realize I was carrying until now.
My pizza balances nicely on my hand as I extend my other to shake. “Nice to meet you. I’m Kailey,” I say. Conner shakes firmly, and I feel that familiar static electricity dart through my hand. “Stop with that, though.”
“Honestly, I’m not doing that. It must be you.”
“Uh, no. I don’t do that. Maybe if you’d pick your feet up more when you walk.” Our walk slows down as our voices get louder.
“I’ve never done that with anyone,” says Conner. “You’re the one with the hidden powers after all, remember? Maybe you’re like ‘Super Shock,’ the superhero, or something. No, better yet—‘Karmelean: your personal defibrillator.’ Yeah!” He laughs at his own joke, but stops quickly as his pizza slides down the front of his shirt.
“No need to reheat later, Sparky McGee!” I prance well ahead of him and find the door Lupa mentioned. The workmanship is indeed superb, giving each sea creature a life of its own, suspended in wood.
“Wow.” Some of the pizza sauce still lingers on his shirt. “This is a hundred-dollar shirt, you know,” he says. He speaks without taking his eyes off the door.
“Looks like you got robbed,” I say.
Just as he is about to return the fire, a low-pitch rumbling noise leaks from beyond the door. We look to each other and both grab the doorknob. The shock from that simple touch sends an electrical current up the door, which reaches out to each fish and anemone carved into it. For a brief three seconds, the creatures are alive, swimming to and fro across the door.
But as quickly as their lives began, they freeze and are once again carved into the door where they last swam.
“Beats the Shedd Aquarium any day!” says Conner. He turns the knob and opens the door ever so slowly, revealing the room beyond, foot by magnificent foot.
To imagine standing on the bottom of the ocean floor with all your clothes on, breathing air as schools of fish swim between your legs does not even come close to the experience even of standing in the doorway of this room. Bu floats in the center of the room, his back to us. He talks, but I cannot understand his words or see who or what he may be talking to. As I gather the courage to step inside the room, Bu’s head turns 180 degrees and he smiles. No matter how much I love and trust Bu, that simple movement still creeps me out.
“That is horror-film material,” says Conner, shaking.
“Glad we can agree on something.” As we enter the room, the door disappears behind us and the room gets very moist, as though we have entered a rainforest. The moisture grows heavier and heavier, until we are totally saturated to our underwear. Overwhelming dizziness takes over my body and I wobble, feeling as though my head might explode. I look to Conner and see gills on his neck. “No way!” I say. My words are drowned as I reach to my neck and feel my own set of gills.


There is a tour wide giveaway for the blog tour for Golden Dunes of Renhala. Here is what you can win: signed Renhala hardcover, signed bookmark, tea(s), two fun pouches (one with a skull, the other the word "LOVE"), a snake ring and $25 Amazon or Barnes & Noble gift card. 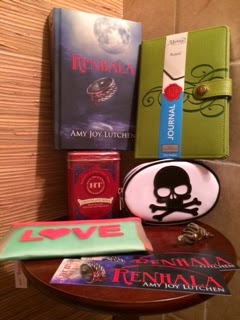