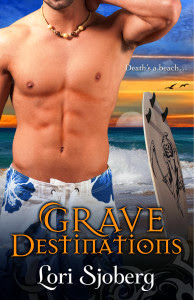 Overview:
She’s sexy-fierce, resourceful—and will do anything to protect victims as innocent as she once was. But this kick-ass reaper never bargained on meeting her not-quite-human match…or putting their very souls on the line.

A luxury Caribbean cruise is Ruby Dawson’s idea of hell even under the best circumstances. Too many bad memories bubble up—especially of the wrenching injustice that made her a reaper. It doesn’t help that Jack Deverell is making this routine soul-collecting job twice as difficult with his devilish good looks and not-so-innocent questions. Now, as several unscheduled, unexplainable deaths throw passengers and crew into a panic, Jack becomes the prime suspect. The only way Ruby can save him is to challenge the decades-old curse threatening his soul. And as a malevolent unstoppable force turns their immortality into a fatal weakness, Ruby and Jack must risk their fragile humanity to save Fate’s delicate balance and their own unexpected destiny…

A Reaper and a soul cursed with a Demon both take a Caribbean cruise…is it possible for them to find love against the background of the high seas, murder and mayhem? Lori Sjorberg’s Grave Destinations, book two of her Grave Series spotlights Ruby, a reaper who hates anything nautical, but she has an assignment, capture a soul scheduled to depart this world and deliver it to her boss. Jack was cursed with a demon decades ago and is on a quest to find a priestess to help in ridding himself of said nameless demon before they are the cause of another death. They meet, there is an instant attraction and Jack realizes Ruby is NOT human, but what is she besides, mysterious, intriguing and beautiful? When people start dying onboard, Ruby isn’t sure who is doing it, but these people were not on her “to do” list. Is Jack’s demon to blame or is there another evil entity onboard? Death has a schedule, but souls are turning up when it’s not their time to move on.

Part mystery, part romance, and all paranormal entertainment, Grave Destinations is a well-written tale with two amazing main characters, each hiding their own “true” selves, each fighting the attraction they feel for each other. Ruby is a strong, smart, independent woman with a heart and a job to do, but can she tame Jack’s inner demon and still stay on track?

I have say, Lori Sjorberg did an amazing job of creating that special magnetic pull that drew me in, without relying heavily on s-e-x, but more on the mystery, the “I’m attracted to you dance,” and well-developed characters in a setting that came alive on the ‘big screen’ in my head. Great pace, great twists, mystery and romance, I like it!

I received this copy from Kensington Books in exchange for my honest review as part of the Lori Sjoberg's GRAVE DESTINATIONS BOOK BLAST & Giveaway stopping at Tome Tender January 22, 2014.