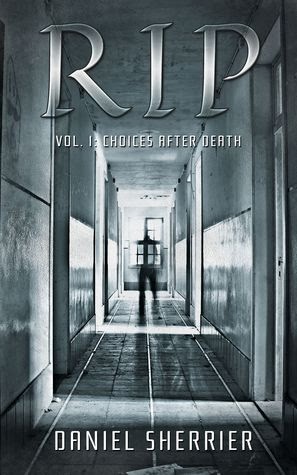 Ghosts are people, too, but not all choose to be good people.

Rip Cooper must overcome his fears and kill dead people to prevent them from corrupting the living. This young loner learns he can perceive ghosts with his five senses as if they were flesh and blood, and he's just as solid to them -- pretty much the only solid thing, in fact. He works alongside an impure “angel” and his ex-best friend's ex-girlfriend as they teach him how love can lead to strength.

RIP vol. 1: Choices After Death features the first four novelettes in this coming-of-age and redemption story: “Touch,” “Alone,” “The Crazy Line,” and “Point B,” plus the short story “Strength."

My Review:
RIP: Choices After Death by Daniel Sherrier

Are there ghosts among us? If so, who are you going to call? Rip, and his evil-ghost fighting team, of course! Rip, short for Ripley, always thought he was just a regular guy, until he started seeing ghosts and then he wasn’t so sure if he was even sane. Enter Serissa, a “good” ghost, who explains to Rip that ghosts, like people can be good or evil. She goes on to tell Rip he is one of THE SEVEN, (cue dramatic music) who have a special gift that allows them to see and eliminate the evil ghosts, sending them on their journey into wherever evil ghosts go. Rip doesn’t think he is the right guy for the job, but something happens that changes his mind and his destiny is set. With his chance reunion with Kalli, a girl from high school, whose faith is strong, the three become a ghost busting threesome.

RIP: Choices After Death-Volume 1 by Daniel Sherrier is NOT your normal paranormal adventure! His ghosts will not keep you up all night, listening for things that go bump in the night. With an unlikely set of heroes, get ready to chuckle more often than not at their banter, especially the utterly disarming Serissa. Daniel Sherrier writes with a sense of humor and delightful style that flows along easily and will appeal to all ages! As he allows Rip to grow into his role and assume his position among the Seven, the transformation is remarkable. A fun read that is light, quick and a refreshing change from the dark side of ghost stories!