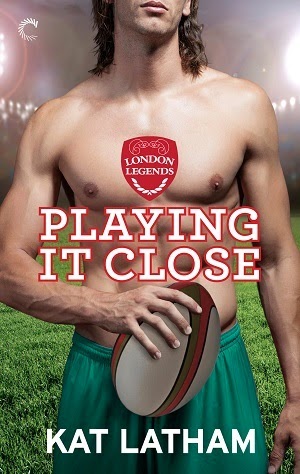 Where do you go to escape everything when you're one of the most famous rugby players in the world? For Liam Callaghan, that place is a remote lodge on Venezuela's Caribbean coast. Perfect, except he doesn't exactly want to be alone with his thoughts. Enter Tess Chambers, the ultimate distraction.

Still reeling from a professional disaster that's made her all but unemployable, Tess understands the desire to move through life as somebody else. So when instantly recognizable Liam uses a fake name, she runs with it and creates a temporary new identity of her own.

Their time spent together in paradise is idyllic but brief—after one passionate night, Liam wakes up to find Tess gone. Returning to London, he's shocked to learn she's taken a job with his team's new sponsor. As the Legends' captain, he'll have to not only figure out how to work with the one woman who ever left him wanting more, but also convince her that their feelings in the present mean more than any lies they've told in the past.

My Review:
Playing It Close by Kat Latham

Knowing the Score is a fantastic story about two wounded but very public people facing difficult times and finding love.

Liam Callaghan, rugby champion, is reeling from the loss of his mother. Tess Baily is facing a political fire storm over her sexual harassment charges against her ex-work place. Both find solace in each others arms in a eco-lodge resort in Venezuela. Both giving each other false identities...but when they return to real life and their jobs...they discover Tess might be the ultimate decision in financially saving Liam's rugby team.

Even if their burning passion follows them from the jungles of Venezuela, their working affiliation makes their chance at further relationships forbidden.

For some reason, the entire time I was reading Playing It Close I had a picture of Stu stuck in my head...what a visual.

I loved Latham's writing style. I was immediately pulled right into the complicated lives of these two characters. A tumultuous relationship, heart felt internal inventory, and two characters that might be famous/infamous but where completely relatable, how could I not be catapulted into their lives. Tess's father's introspective into Tess's character actually had me in tears, showing the true love a of family.

I didn't have the pleasure to read Knowing the Score first and would love the opportunity to get more on Spencer's and Caitlyn's story. That being said, Playing it Close completely stood on its own.

I received this ARC copy of Playing It Close from Kat Latham in exchange for a honest review.