Binds That Tie by Kate Moretti 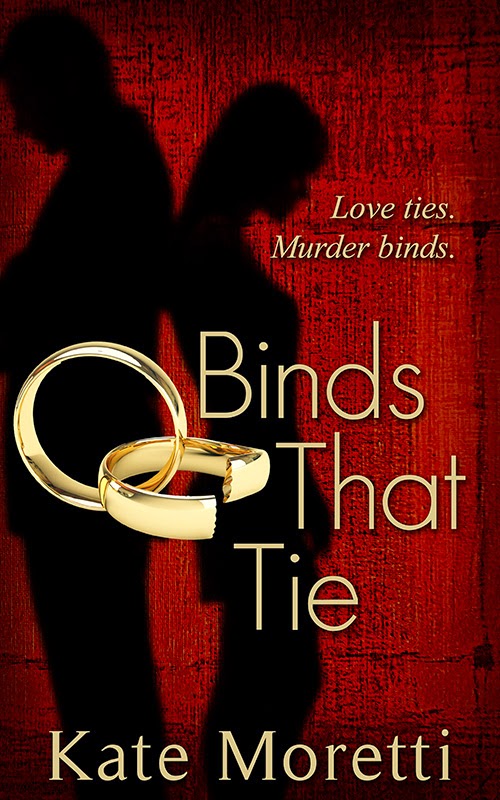 Binds That Tie
by Kate Moretti

Maggie never felt as though she belonged until Chris Stevens showed her what true happiness meant. Ten years into their marriage, miscarriages and infidelities have scarred them both. Despite their perfect-couple image, Maggie can’t look at Chris with anything but resentment. When a charismatic stranger offers the opportunity for a little harmless flirtation, she jumps into the game.

But charm soon turns to malice, and a deadly split-second decision forces Maggie and Chris onto a dangerous path fraught with secrets, lies, and guilt. With no one else to turn to—no one she dares trust—Maggie will ultimately learn just how binding marital ties can be.

My Review:
Binds That Tie by Kate Moretti
My Rating:

Talk about twisted relationships, deceit, betrayal and messed up characters! Binds That Tie by Kate Moretti goes to the top of my list as “Never Saw THAT One Coming!” endings. Complicated lives, broken marriages, broken dreams, living nightmares, it’s all here. A broken heroine who one can feel for, but not necessarily like, has had huge heartbreaks in her past, but she has focused only on what has happened TO HER and selfishly condones her own transgressions until they threaten to topple her already unsteady world. When a spurned fling arrives at Maggie’s house, drunk and menacing, she makes a decision and follows through with dire consequences to the life she doesn’t even want. Steve, Maggie’s husband, is a man with a prison record already, takes the fall for a crime he did not commit, will he go to jail to protect Maggie? Will their tangled web of lies entrap them both? Does Maggie deserve Steve’s sacrifice or has he left himself an out if it looks like he’s going to jail?

Right out of the gate, Kate Moretti drops us into a dark world, filled with jagged edges. She has created characters with immense holes in their characters, yet, at times, they actually give you what you want from them. Steve is not an angel, but he seems to have misguided honor and after making some incredibly foolish mistakes, is dealing with the consequences. Maggie is so wrapped up in Maggie, she is extremely difficult to like, her actions (plural) are not justification for her past pain. Jake, while an amazing attorney who steps up when needed, has a past with Maggie that flames to life, temporarily. Did I mention he is married to Maggie’s sister?

Hats off to Kate Moretti for making me cringe, shake my head in disbelief and be unsure of who to root for! I could NOT put Binds that Tie down, I was in such a twist emotionally over how I wanted this to end. The reader must decide if justice is served or if a reckoning is coming. A real nail biter, head banger and shocker all around!


I received a copy as part of the Binds that Tie Tour & Giveaway coming to Tome Tender May 21, 2014.