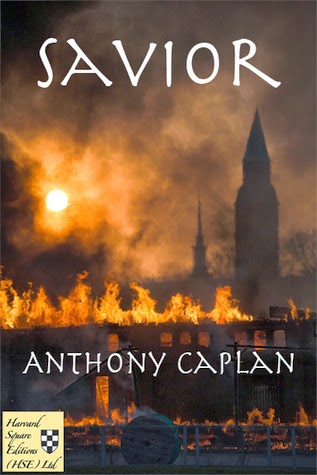 Publication Date: April 4, 2014
Publisher: Harvard Square Editions
ASIN: B00JHLOXTW
Genre: Mystery/Thriller/Coming of Age
Audience: I see no age this would be inappropriate for
Number of Pages: 247
Available from: Amazon

A father and son stumble into the secret world of the Santos Muertos, a crime cartel bent on global domination. The son must find his father and keep the secret of the ancient Mayan code underlying the creation of matter in the universe from falling into the wrong hands.

A story of sacrifice and love.

My Review:
Savior by Anthony Caplan
My Rating:  5 Stars

In the literary world, a gem comes along that deserves to be recognized and read. Grab your sunglasses because Savior by Anthony Caplan shines it’s brilliance up there with the rarest of rare finds! Part mystery, part adventure, part psychological thriller, part coming of age, 100% amazing, a non-offensive read for any age!

Al and his son Ricky have lived under the shroud of grief since Mary’s brutal death to cancer, growing more distant, each with their own pain. In an effort to re-kindle a connection, they take a surfing vacation to Guatemala, a place Mary loved, steeped in its ancient lore, beliefs and cultures. Through an innocent purchase of an ancient tablet that reminded Ricky of his mother, father and son are catapulted into the dark world of the Santos Muertos, a cartel bent on global purification and domination. Ricky’s tablet, the Chocomal holds the final secrets that will unleash the Santos Muertos’ diabolical plan.

When Al is taken prisoner, Ricky begins a desperate search to free his father while keeping the tablet safe. Spanning from Guatemala to Canada, his journey is one that legends are made from, his experiences are epic and his ability to improvise grows exponentially. Is there a force watching over him, keeping him safe? Will he find his father before the torture and imprisonment finally end his life?

Using flashbacks and a change of POV, we are carefully guided through this tale of love and sacrifice, determination and the classic good vs evil as Young Ricky takes on a machine far bigger than he to find the father he loves and save the world from devastation and evil dominance.
What can I say, Anthony Caplan has gone above and beyond with Savior by creating a world that is chaotic, frightening, and intriguing all at once! Ricky’s character grows with each page, as you see the love he realizes he has for his father, flawed or not. Al also realizes his mistakes as a father, that he must allow Ricky to make his own way in the world, not living vicariously through his son. Both will do all in their power to save the other, at any cost. Each satellite character is well-defined, fit perfectly into this tale and sometimes provide comedic relief which allowed me to loosen the white knuckle grip I had on my Kindle. Kudos to the talent of Anthony Caplan and his magnetic style as a story teller! If you are looking for something fresh, with dark undertones, yet still filled with love and hope, this is it!


I received this ARC copy from the author in exchange for my honest review.