Jaguar Hunt by Terry Spear (Heart of the Jaguar #3) 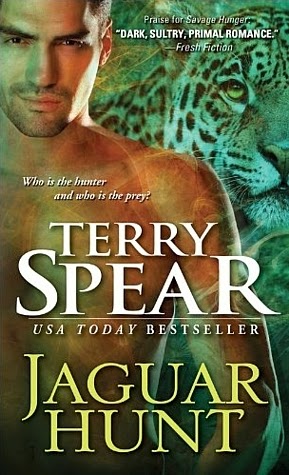 Synopsis:
Agent Tammy Anderson has a reputation: she prefers to work alone. So when she’s paired up on a mission with jaguar-shifter David Patterson—who’s only recently been released from jail—to say she’s less than thrilled is an understatement. Until she realizes that this sexy agent has what it takes…

Soon, what started as an “easy” mission to locate a missing jaguar takes the pair to Belize, where they’re chasing down two renegade teen shifters who know more than they’re telling. As the action heats up, can they keep their minds on the job and off each other?

USA Today bestselling author
Terry Spear has written over fifty paranormal and historical Highland romances. Her debut, Heart of the Wolf, was named a Publishers Weekly Best Book of the Year (romance category). A retired officer of the U.S. Army Reserves, Terry also creates award-winning teddy bears that have found homes all over the world. She lives in Texas. For more information, please visit http://www.terryspear.com/.

Tammy barely could keep her head above water, choking on it, getting a snootful of it and having to sneeze, which forced her muzzle into the water again for another bout. She was a strong swimmer, like all jaguars, but the water going down the wrong way was hindering her. She needed to get out of the water, run back upstream to where she’d been when she was knocked into the river, and let David know what had happened to her.

He was sure to be frantic when he didn’t come across her on the riverbank like he should have. Over the roar of the water, she heard David calling out to her. She tried to roar back but she swallowed another mouthful of water. Damn it.

Coughing, choking, and sneezing, she got another nose full of water. She felt like she was drowning as she persisted in swimming toward the shore. Her cat paw pads finally touched the slippery moss-covered stones beneath the water. She scrambled for purchase and dragged herself onto the rocky bank. Trying to catch her breath, she sneezed again and again, and coughed up more water. When she felt she could breathe in and breathe out normally, she roared to let David know where she was and that she was safe.

David answered her, growing closer as he ran in her direction. Feeling relieved, she shook off some of the excess water, coughed and sneezed again, and then raced to join him. She climbed the steeper rocky areas with a leap and a bound, until she smelled him on the breeze coming off the water and swirling downstream.

His scent grew stronger until she was practically on top of him, his eyes glowing green in the moonlight. God, she loved seeing him. He looked so endearing— his overprotective he-cat expression mixed with a look of unguarded anxiety.

They greeted each other nose to nose at first, whiskers brushing gently, caressing. Assuring each other they were okay. But he quickly nudged at her wet neck, a question in his action, wondering why she’d decided to go for a swim, no doubt. She licked his muzzle and was ready to return to the bungalow, but he wasn’t leaving. Instead, he checked her over from head to tail, making sure she hadn’t been injured. When he seemed content that she was all right, he nudged at her to return.

When they reached the backside of their bungalow, she leaped on top of the wall surrounding the shower and jumped down. Her fur had long since dried. David landed beside her and again nuzzled her in a way that told her he’d worried about her. Had he seen what had happened to her?

Before she had the chance, he shifted and unlocked the door to their bedroom using the key hidden inside one of the potted plants. “What the hell happened out there?” he asked.

She pulled on a T-shirt and panties. She was wornout and past ready to go to bed. “I’m all right.”

“Hell, Tammy,” David said and approached her, still looking a bit shell-shocked. He pulled her into his heated—very naked—embrace. She wondered if he always acted this way when he learned a fellow agent had become a rogue. “I thought I’d lost you.”

“A male cat slammed into me, shoving me into the river. I didn’t catch his scent at the time, but I had earlier.”

Now it was her turn to look shocked. “Are you serious?” She knew he was, but she just couldn’t believe it.

“Yeah. When I reached where you had been, I couldn’t find your scent trail and was certain you fell into the water—after you’d been shot. Twice. I roared and roared, trying to get you to respond as I headed downriver. You didn’t call back.”

“I…I didn’t hear anything at first. I was underwater for a few minutes, trying to get to my feet and paddle. Coughing, choking, and sneezing after that.”

David cupped her face and took a deep breath. “I thought I’d lost you. Twice now. Your brothers and mine would kill me.” Without any warning, he kissed her.

He wasn’t working up from sweet to something hotter, just kissing her—lips to lips, tongues entwined, hands in her hair—and holding her close, lost in the moment.

She loved the way he was so tender and passionate at the same time, wanting so much more. Not that she should even entertain such a notion.

She kissed him with just as much exuberance, enjoying the feel of his warm, sexy mouth against hers, the caress of his hands on her cheeks, as she stroked his bare back with as much tenderness. She knew she should pull away and remind him they needed to let their bosses know what was going on.

After one more kiss.

USA Today bestselling author Terry Spear has written over two dozen paranormal romance novels and medieval Highland historical romances. In 2008 HEART OF THE WOLF was named a Publishers Weekly Best Book of the Year. A retired officer of the U.S. Army Reserves, Terry also creates award-winning teddy bears that have found homes all over the world. She lives in Crawford, Texas.