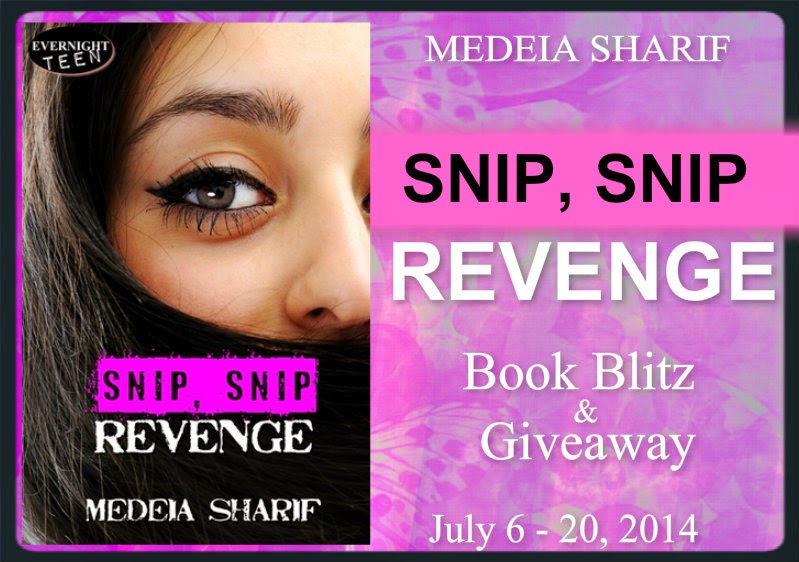 Beautiful, confident Tabby Karim has plans for the winter: nab a role in her school’s dramatic production, make the new boy Michael hers, and keep bigoted Heather—with her relentless Ay-rab comments—at bay. When a teacher’s lie and her father’s hastiness rob her of her beautiful hair, her dreams are dashed. The fastest barber in Miami Beach has made her look practically bald.

With all her pretty hair gone, Tabby doesn’t believe she fits the feminine role she’s auditioning for. Michael is still interested in her, but he’s playing it cool. Heather has taken to bullying her online, which is easier to do with Tabby’s ugly haircut. Tabby spearheads Operation Revenge, which proves satisfying until all of her problems deepen. After messing up, she sets to make things right.

Writing the Multicultural Character
A Special Guest Post by Medeia Sharif
In my debut, BESTEST. RAMADAN. EVER., the multicultural aspects were very obvious. The main character, Almira, was fasting for Ramadan for the first time with one foot in her family’s old world and another foot in modern Miami. That was 2011. Fast forward three years, and I have another book out, SNIP, SNIP REVENGE. It’s multicultural, but in my opinion doesn’t read so.


The main character is Tabby Karim. She’s Turkish-American. Her ethnicity isn’t a big deal to her friends and most of her classmates, except in the face of Heather, her racist bully. Tabby’s circle of friends includes Hispanics and African-Americans, and this also isn’t important. The book takes place in Miami Beach, which is diverse. Other than Heather, I didn’t try to make a point about anyone’s culture. Tabby is very much an all-American girl and a typical high schooler who has the same growing pains as any other teenager.


If Heather weren’t racist, I could have had her hold something else against Tabby. With this book, people’s ethnicities were not the central focus—the story and characters were. Some multicultural books will have more of the main character’s culture and religion displayed, while others won’t. It all depends on the plot. With SNIP, SNIP REVENGE, I wrote a story of a girl who just happens to trace her roots from a Middle Eastern country. Ethnicity was woven into the story; it wasn’t a top layer.

Author Bio
I’m a Kurdish-American author who was born in New York City, and I presently call Miami my home. I received my master’s degree in psychology from Florida Atlantic University. After becoming a voracious reader in high school and a relentless writer dabbling in many genres in college, I found my niche writing for young people. Today I'm a MG and YA writer published through various presses. In addition to being a writer, I'm a middle school English teacher. My memberships include Mensa, ALAN, and SCBWI.