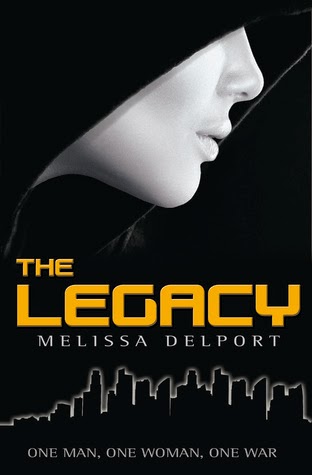 The Legacy
by Melissa Delport

One man obsessed with power.
One woman prepared to sacrifice everything to stop him.
One war that changed the world.

“Eric Dane has segregated the wealth and resources that remain, giving a select few the highest chance of survival and leaving the rest to starve!”
World War 3 lasted twelve days and almost eradicated the human species. Growing up in post nuclear America, Rebecca Davis remained blissfully ignorant of the despotic leadership that had seized what was previously the most powerful nation in the world. When the truth is revealed and Rebecca discovers that everything she has been taught is a lie, she is determined to fight for the life that she has not been allowed to live.

In order to do this, Rebecca has to cross the boundary fences and venture out of the safety of the New United States, into the barren wastelands. It is there that she finds allies she never dreamed existed.

In Rebecca, the Resistance has finally found the ultimate weapon.

“You were given this life Rebecca, because you alone are strong enough to live it.”

An action-packed, adrenalin inducing thrill ride that will have you riveted until long after you have turned the last page.

My Review
The Legacy by Melissa Delport

Looking for that special read that will weave its way through your mind with its intensity, its well-developed characters and the fresh, creative strength of its author? Like the conflict of a post-apocalyptic, dystopian world where the lines are blurred between the truly good and the truly evil, where deceit and intrigue, love and hate fuel the flames of the plot? The Legacy by Melissa Delport is going to rock your world as you are drawn into this tale, lock, stock and barrel.

World War III has decimated the United States and the world. Governments are overrun, the people of the U.S. need a leader and grasp at the first one with the charismatic strength to rally their hopes and hearts. Eric Dane has ambition, and the power to take control, leaving the country in the stranglehold of a brutal dictatorship that is choking the life out of its citizens. From this evil rises a secret resistance that is gaining momentum and has infiltrated the heart of the beast.d becomes the most powerful weapon the resistance has.

One beautiful and intelligent woman who has lost so much has learned the art of deceit as she steals Eric’s heart and becomes the most dangerous and powerful weapon the resistance has. Outwardly, Rebecca Dane is the loving and devoted wife, standing strong by her husband’s side. In truth, she is an operative for the resistance. She also sees a side of Eric the world never sees as she shares his life and his bed. Will she be strong enough to stop the next step in Eric’s plan to control society? Will she be exposed? Can the resistance save her and the country before it’s too late and more people are crushed?

Melissa Delport is a fresh, unique and strong voice in the Dystopian/Post-Apocalyptic genre. She writes with great detail in her development of her tale, her characters and NOTHING is overlooked or short-changed while she races us along in her fast-paced world. This author is a must read talent!


I received a review copy from Tracey McDonald Publishers and Melissa Delport in exchange for my honest review.