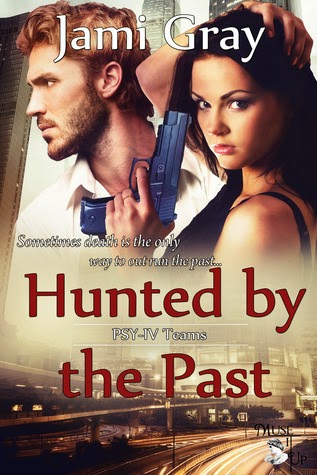 Hunted By The Past
by Jami Gray

Sometimes death is the only way to out run the past…

A reluctant psychic who can relive the past, a man well versed in keeping secrets, and a psychopathic killer enter a deadly game where the past determines the future.

Changing the past is an impossibility ex-Marine, Cynthia “Cyn” Arden, understands all too well. Struggling in the aftermath of a botched mission, which cost her two teammates, her military career, and a fledging relationship, she’s brought home by a panicked phone call. The psychic killer behind her nightmares has escaped military custody to hunt down the remaining teammates, one by one. Next on his murderous list–Cyn. Her only chance at survival is to master the psychic ability she’s spent years denying.

The killer’s game brings her face to face with the one person guaranteed to throw her off kilter—the unsettling and distracting man she left behind, Kayden Shaw. Once she believed he’d stand by her side, until he chose his job and his secrets over her. A choice that’s left the scars of the past etched deep on her mind and heart.

To survive this twisted game, Cyn must risk trusting her heart and accepting who and what she is, or lose not only her life, but the man she loves.

My Review
Hunted By The Past by Jami Gray

No matter how much we want it, we cannot change the past. We can revisit the good and bad in our minds, but imagine actually reliving the past psychically? Ex-Marine, Cyn Arden has seen and lived through hell, a mission gone wrong and the loss of fellow Marines and her military career. When the monster behind her downfall has escaped custody, he has one goal in mind, to finish off Cyn and the rest of her former teammates. Re-entering into her life is Kayden, the man who chose his job over her. Must she now embrace the ability she has in order to survive, and if she does, will Kayden stand by her or walk away once again? Will she find peace only through death or will she finally have the backing of others like her?

Hunted by the Past by Jami Gray is “in your face” action, drama and tension, starting from one panicked phone call and continuing on to the very end. Jami Gray has created characters that are scared, yet strong, a little mysterious at times, damaged and not always likable, but one thing for sure, they feel flesh and bone real. Want to cringe over the bad guy’s actions? You will find the villain despicable. Each scene stands up like a 3D cut out and never once does the feeling of urgency in the chase falter. Great reading, great action, high emotions!

I received this copy as part of the Hunted By The Past Tour & Giveaway at Tome Tender.