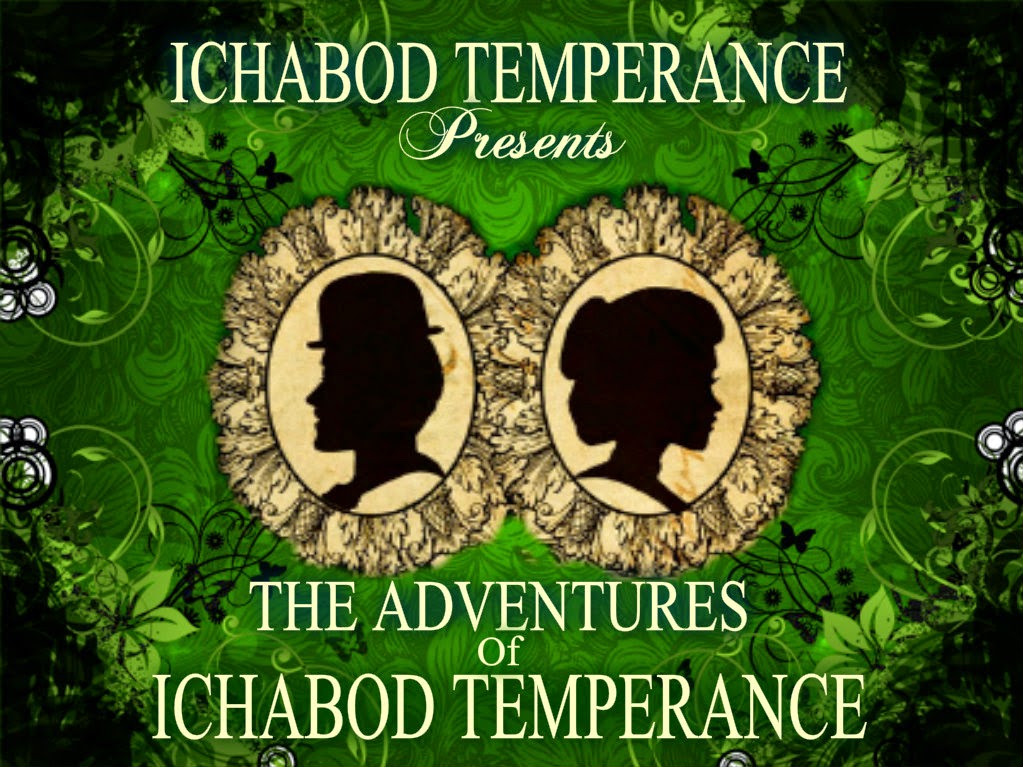 It all started with a Comet in the sky...
STEAMPUNK FANTASY & ADVENTURE as only
ICHABOD TEMPERANCE can tell it!

Quirky with a touch of Southern Charm 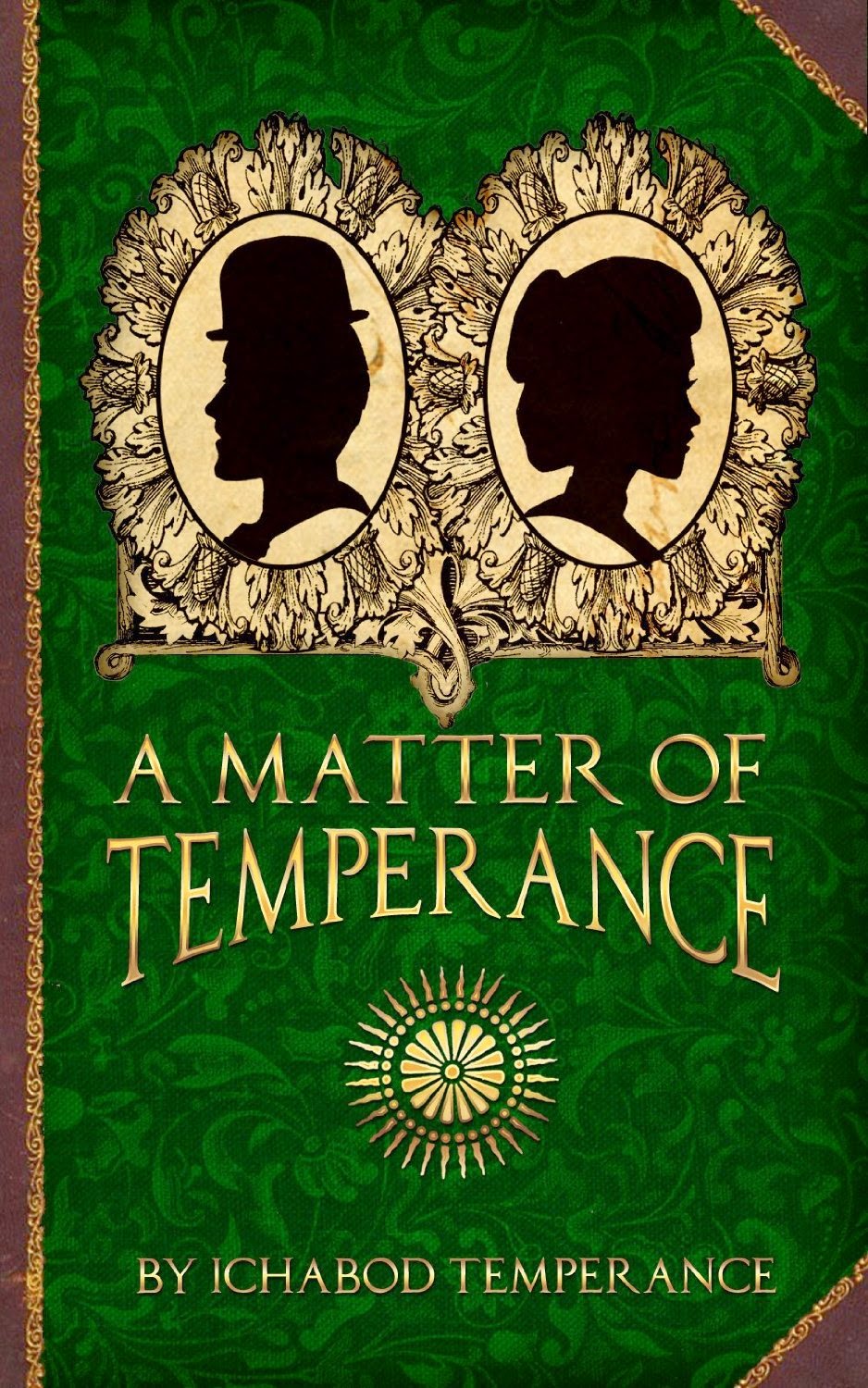 A MATTER OF TEMPERANCE
Book 1

In a past that never was...

The year is 1869. Earth experiences the close pass of a comet never before seen. In its wake, many of Terra's inhabitants find themselves changed. Among men, prodigies rise in unprecedented numbers, while many ordinary adults suddenly find themselves possessed of preternatural genius. Likewise, non-hominid animals become self-aware and intelligent.

Fast forward to 1875. A young “comet prodigy” from humble beginnings, Ichabod Temperance, has become the world's foremost inventor. He travels to England to deliver his latest brilliant invention to a famous explorer, until Fate intervenes. Meanwhile, a lovely young Bluestocking, Miss Persephone Plumtartt, survives an experimental accident only to find herself imbued with a power she can neither understand nor control, while dark forces and malevolent creatures pursue her, leaving a gruesome wake of death.

Yet, worse is to come. The naïve young inventor and the lovely intellectual find themselves fighting not only to save their own lives, but to prevent the destruction of all life on Earth. 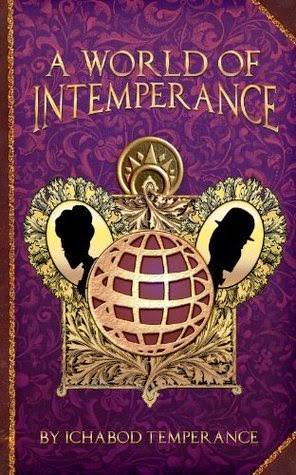 A WORLD OF INTEMPERANCE
Book 2

It is New Year's Eve, 1875. In this humorously told Steampunk tale, adventure-prone Ichabod Temperance and his lovely sweetheart, Miss Persephone Plumtartt, once again find themselves swept up into a whirlwind of misadventure and international catastrophe. The entire world totters on the brink of war, as various nations develop arsenals of dreadful power. It seems as though every nation on Earth lusts for Empire. A sinister plot boils to change the course of human history. Along with a remarkable cast of characters, including sapient animals and clockwork men, our heroes find themselves plunged into unimaginable peril!
Goodreads
Amazon | Barnes & Noble
Link to Dii's 5 Star Review 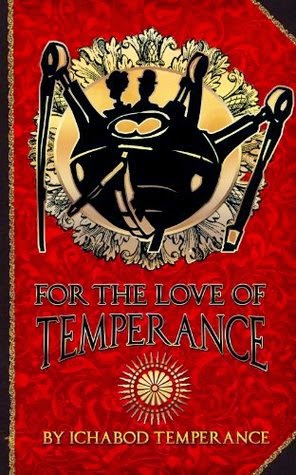 FOR THE LOVE OF TEMPERANCE
Book 3

The sovereignty of Planet Earth is under assault by interplanetary invaders. Ichabod Temperance and Persephone Plumtartt return in this thrilling Steampunk adventure. The duo fight bloodthirsty monsters bent on Earth's conquest. Featuring a cast of unforgettable characters, including the world's greatest actor and a telepathic dog, For the Love of Temperance will scare you and amuse you by turns. 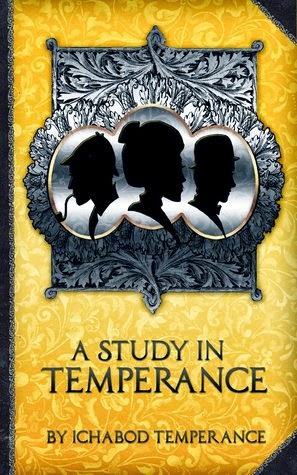 A STUDY IN TEMPERANCE
Book 4

"'Twas the hand of fate that brought Miss Plumtartt and me together, for, in truth, we have been happenstance-stricken and adventure prone ever since." -Ichabod Temperance, For the Love of Temperance

Such is the case once again as Ichabod Temperance and his lady love, Miss Persephone Plumtartt, are hurled into adventure and mystery. This time, they return to Persephone's ancestral estate in England, where they hope to enjoy a much-needed vacation. However, fate has other plans for the young couple, as a series of murders close in upon the innocent pair. A notorious Victorian Era London detective assists the plucky protagonists through a tangled web of intrigue involving an incredible cast of suspicious characters
GoodreadsAmazon
Link to Dii's 5 Star Review 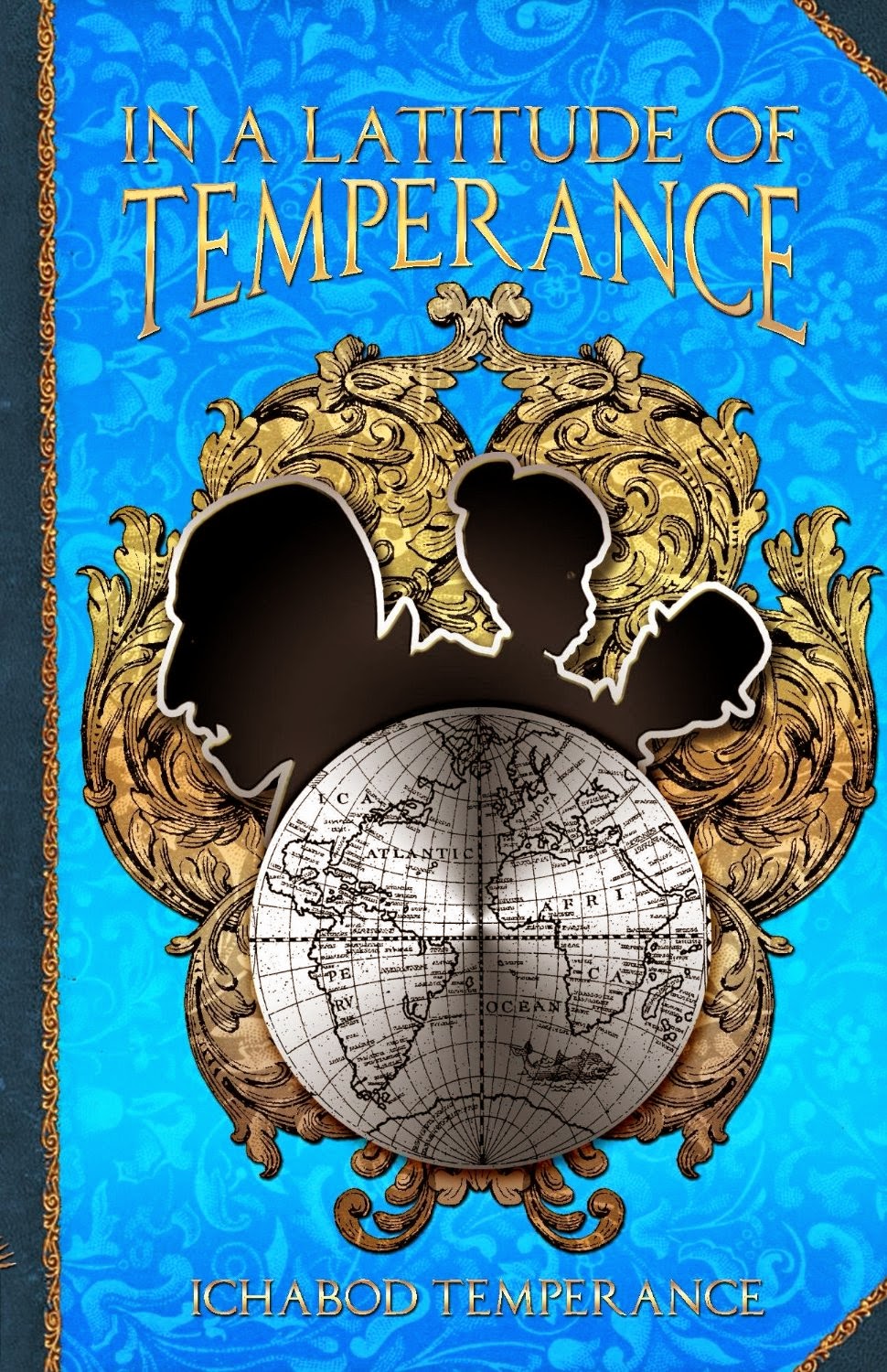 IN A LATITUDE OF TEMPERANCE
Book 5

The adventure prone Ichabod Temperance and his capable cohort Persephone Plumtartt are again hurtled into baffling mystery and hair raising intrigue. A dangerous mission exposes an unspeakable danger to the safety of the entire world. Assisting our brave protagonists is an amazing cast of extraordinary and charming individuals. Thrilling action in this humourous ride to once again save our imperiled planet from certain destruction carries Ichabod and Co. to uncharted waters of surprise and terror.

Tome Tender was thrilled and a little giddy to be able to catch up with the delightful Ms. Plumtartt and the daring Mr. Temperance for a most interesting interview, for which I am most grateful!

1. I'm going to just jump right in and get this burning question out of the way: Open question anyone may reply:  Who would be the true brains of the dynamic duo of Miss Plumtartt and Mr. Temperance?

-Ichabod-
Hello Dianne! Before we answer, please allow me to say what an honour and thrill it is to be here on your lovely blog! You are so gracious to offer this wonderful opportunity of a Tome Tender interview and spotlight!

I gotta tell you right up front, Ma'am, it's Miss Plumtartt here that has all the smarts in our little adventures. Why, this pretty gal has enough brains stuffed in her adorable, little ol' skull to fill a an empty three door dirigible hangar. Our backgrounds are very different from one another, but this contrast normally works to complement each others strengths and weaknesses.

-Persephone-
Now, now, Mr. Temperance, your depth of modesty is charming but let us give credit where credit is due. In fact, it has been your uncanny genius for things mechanical that have saved our lives over and over again, and brought to life your best friend, Mr. Cogito.  I am merely the daughter of a linguist and a physicist.  My book knowledge becomes useful at times, but you are the true genius.

2. If the Revelatory Comet were to return, do you foresee any more changes among the populace of Earth? Could all of the previous effects be *gasp* undone?

-Ichabod-
Oh, yes Ma'am, Miss Dianne! I have no doubt that if that rascally comet came around again, we would be hip deep in a world of technological pooh. As for the previous changes of the Revelatory Comets passing being undone, I do not think they would come to pass. This is not a scenario of 'letting the cat out of the bag' or 'the genie from the lamp', this is more of a case of trying to regather the feathers of a pillow factory after it's been hit by an April tornado.

-Persephone-
I am assured by the world's finest astronomers that the comet's trajectory will make it impossible for it to return for the next 10,000 years.  It will be another generation's problem, if humankind manages not to kill each other in the intervening period.

3. I do believe I detect more than a working relationship growing here, particularly on Mr. Temperance's part. Forgive my curiosity, but, Miss Plumtartt, are these feelings reciprocated?

*Sigh*...these Victorian constraints on what President Clemens would call "good old plain speaking" are more binding than the corsets I favour.  However, let us just say that Mr. Temperance (I cannot get that man to call me Persephone!) is the most singular and adorable man I have ever met.  My upbringing precludes my being more direct. His physiognomy is pleasing to my aesthetic sense as well.

4. As an author, from Alabama in the good old U.S.A., how did you find yourself in London, amidst the Steampunk Era?  Are you really a soul from a long past era where surface impressions and manners are more prevalent? Have you always had a heart for larger than life adventure? (yep, that's three questions in one)

-Ichabod-
Dang, you're a sharp one, Miss Dianne, Ma'am! I reckon I find myself on the cusp a most perplexing temporal phenomenon. Complete understanding of the situation still eludes me, but I suspect that a rip in the fabric between this twenty-first century of a non-Revelatory Comet universe and the one I know in 1877 has created this connection. Probably I was messin' around with somethin' back then that I shoulda let alone. This monkey business has upset some sort of time-travel connection. The person I am in 1877 writes the stories. The person I am in this moment of time is compelled to put these adventures in print. If I can get a handle on all the pertinent aspects of this anomaly, I will write it into a story. Thanks for the idea, Dianne!

Yes, Ma'am, I really possess the soul of the character in the books. That is the most real projection of myself I can imagine. Many people have an image of Alabamans as uncouth, but most all the Southerners I know are raised to be courteous, polite, and respectful. We really do say 'sir' and 'ma'am' to one another.

As far as adventure goes, you got me. Yes, Ma'am, I have been a bit of a daredevil since I was a small child. Starting with bicycles, skateboards, and mini-bikes, I progressed into motorcycles and fast cars. I have had long stints as a drummer in a punk rock band, karate enthusiast, and professional wrestler. Due to now possessing zero cartilage in either knee and extensive damage in both, I have drifted towards writing, acting, and movie stunts.

5. You often change points of view, who is the more accurate story teller?

-Ichabod-
Eep! My style of writing is still working itself out. I think I am what you might refer to as a 'pantser', as opposed to 'plotter'. The point of view in the stories is just something that has developed 'organically'. It really was not until the fourth book that I set out to deliberately play with the point of view, and stress the immediacy of the present tense. One example of this development is the ever-declining amount of description by thought or third person, and the ridiculous, over the top use of description by means of dialogue. This is especially brought out in my comical fight scenes!

-Persephone-
I tend toward exposition, so I largely keep my hands off of his journals. He has a most charming way of writing.

6.  Readers are always interested in their favorite characters and authors, so, from each of you, Ms. Plumtartt first of course, please divulge three things about you that are not easily found online.

-Persephone-
1. I prefer Mille Fleurs perfume.
2. I am fluent in 24 languages, mostly dead languages.
3. I sleep best in 10,000 count sheets with a thick coverlet.
-Ichabod-
Heck, I feel as if everything about me is already on display in my books. I have revealed much that I usually keep on the 'down low' about myself in this interview already! If I may, though, I would rather say something about the books, please.
1. All of the characters are based on real life friends. {Even the villains.}
2. Some people get re-branded as different, though secretly returning characters.
3. Somehow, my own character seems to become more inept with each passing novel...
Thank you so much for allowing us to be guests on your blog, Dianne!
You have a generous heart!
Happy Reading, everybody!
Cheers! *klink!*
Your pals,
Ichabod & Persephone.

Look What I found!  One of Ichabod's inventions, Green Beauties! 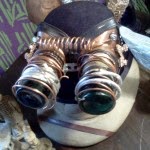 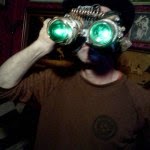 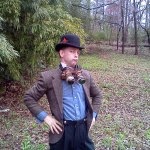 Ichabod Temperance is just a little fellow living in Irondale, Alabama, with his lovely muse, Miss Persephone Plumtartt, and their furry pack family.

Connect with Ichabod - (You'll be glad you did)

Ichabod and Persephone have graciously offered the

That's TWO Lucky Winners!
a Rafflecopter giveaway
Posted by Dii at 12:00 AM