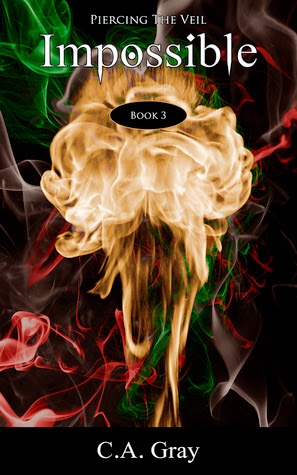 In this gripping conclusion of the Piercing the Veil trilogy, the Watchers and the Shadow Lord both amass their ranks, the battle begins, and the true identity of the Child of the Prophecy is revealed—to the shock of all.

My Review
Impossible By C. A. Gray

The final battle is drawing near and doubts are creeping into the hearts and minds of Peter, Lily and their allies as their powers are beginning to flicker like a light bulb on its last filament. Will they lose their powers just when they needed them most? Things seem to be falling apart at the worst time, the Shadow Lord has control over legions of powerful Penumbra with the Philosopher’s Stone in his possession. He also has control of Peter’s twin brother’s body, so to kill The Shadow Lord is to kill an undeserving innocent. Add to that, no one is sure who the Child of Prophecy is or who will win the battle between good and evil. Whatever the outcome, it cannot come without pain, too much pain.

The clock is ticking and the Watchers need to retrieve the fragments of Excalibur from the Dark Lord or all is lost. Is it too late for Peter and Lily, as well as the rest of the world? Will King Arthur’s legend become a tale lost to infamy? The always in control Isdemus requires full compliance to lead his army, but, seriously, Lily and full compliance in the same sentence? PULEEZE. Both dimensions are crossed to end this battle of winner take all, as the penumbra become stronger over their human minions, in spite of the many who have learned to see with their minds and hearts and to recognize the evil sitting on everyone’s shoulder. Not everyone will survive this time, and it may take the wisdom of an old man and the innocence of a young child to lead the Watchers to battle, but will it be enough? Secrets are kept, the unimaginable is revealed and time has run out, someone will die, the time has come.Now is not the time for doubt.

C.A. Gray has done it! She has brought the conclusion to her series home with a flourish! Impossible just may be the best of the series, driven by determination, strategy and loyalties, and even the budding of young romance. What a wrap! All of the tension and intrigue of each volume magnified times ten! From the wonderfully created characters to the dialogue that fit so well, her world actually breathes with each turn of the page as heroes rise, heroes fall and heroes reveal themselves with as much grit as the original King Arthur and his Knights.

I received this ARC edition as part of C. A. Gray's IMPOSSIBLE Book Tour stopping at Tome Tender October 16, 2014.

Email ThisBlogThis!Share to TwitterShare to FacebookShare to Pinterest
Labels: author review, C. A. Gray, fantasy, own, tour review, Ya