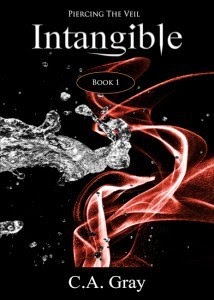 Peter Stewart grew up on a unique version of the Arthurian legends taught him by his father, a harebrained quantum physicist who asserts that anything is possible. But Peter disbelieves anything which cannot be scientifically explained, despite a nagging sense that there is more to the world than meets the eye.

Lily Portman is an orphan with a secret: she can see creatures that are invisible to everyone else. These creatures control every human being she has ever met to varying degrees... until she meets Peter and his father.

When a mysterious stranger stages an accident which nearly costs Peter and Lily their lives, suddenly Lily learns that she is not crazy after all, and Peter discovers the truth of his father’s stories… including the existence of Arthur’s ancient nemesis, one who calls himself the Shadow Lord, and a prophecy with implications so profound that it will alter not only the course of their lives, but potentially the fate of the world.

My Review
Intangible by C. A. Gray

Adventures to save the world sometimes create unlikely allies. Such is the case in C. A. Gray’s Intangible when one young genius who believes only in hard, scientific facts discovers the fairytales and legends his father would share with him may be more than fantasy. Arthurian legends, Excalibur, fair maidens and dark sorceresses, tales sent down through the generations or history and knowledge culminating in the coming of age of one young contemporary boy, Peter Stewart?

Almost everyone has a spirit creature watching over them, guiding them, influencing them, but few have the gift to see them. Lily Portman has always been thought to be a little unbalanced, and this young orphan has paid a high emotional cost for her “gift.” Together, they discover the truth behind the legends as well as the truth behind that things Lily sees on an incredible journey that blends science and fantasy, adventure and danger when they are whisked away to another realm in search of one special hero, who they claim is most likely Peter. So why doesn’t he feel like a hero or a savior? Will Peter be the only one to be able to stop the Shadow Lord? Get ready for the adventure of a lifetime along with these kids and the creatures behind the veil.

C. A. Gray has shaken and stirred her magical tale into a perfect cocktail of fantasy, legends and hard scientific facts. Ms. Gray has built a delightfully realistic word that can be envisioned in full-color mental mode, while populating her world with quirky, endearing characters that must learn to trust and believe in what cannot be quantified through science. Delightful characters, wonderful dialogue and conflict, a fun, fast and furious read for ALL ages.

I received this copy as part of C. A. Gray's Impossible Release Day Tour & Giveaway stopping at Tome Tender October 15, 2014