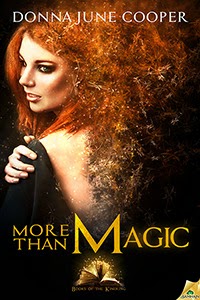 A malignant secret could turn her mountain sanctuary into their tomb.
Books of the Kindling, Book 1
DEA agent Nick McKenzie is sure magic exists—a dangerous drug called Smoky Mountain Magic that’s wreaking havoc on the streets of Atlanta. He’s also sure that locating and eliminating the source could mean his death.
When he arrives undercover on Woodruff Mountain, the beautiful owner’s anxious attempts to scare him off tell him something’s afoot, and it’s not her secret patch of a rare, ancient species of ginseng.
As her dream of seeking medicinal plants in the Amazon fades into the distance, Grace Woodruff struggles to come to terms with an inherited magical gift she didn’t want, and searches desperately for the meaning behind her late grandfather’s final, cryptic message.
The last thing she needs underfoot is a handsome, enigmatic writer recovering from a recent illness. Until an accidental touch unleashes a stunning mystical force and Grace senses the wrath of a malicious blight at the heart of the mountain. Now she must choose between her need to hide her gift from the world…and her desire to save Nick's life.

My Review
More Than Magic by Donna June Cooper

More Than Magic by Donna June Cooper is exactly that, much more than just magic! There is also a mystery, old legends or folklore, and an undercover drug investigation going on. All this in a backwoods mountain area that is remote and very superstitious. Does Grace have the “power” to heal or is some evil entity toying her mind, undermining her spirit and sanity. Nick is a stranger who takes an interest in all things Grace, from her family herb company to the mountains and dark recesses of her life. What is he after? Grace senses something “off” about Nick, but he is not inclined to share.

Grace is only back because of a cryptic message she received, she must cure the mountain, not a disease running rampant, but the mountain itself. Is it more folklore, a message to uncover evil? Is it possible Grace does have the healing power handed down through the generations?
Nick and Grace each have their own quest to uncover truths, but could it be the undoing of their budding romance or even mean their deaths?

Donna June Cooper described the mountain and its area in wonderful detail, yet there was still a feeling that something has been veiled. The characters range from sweet and quirky to inwardly strong, yet mystified by all that is happening. Well written with a wonderful blend of romance, the paranormal and the mysterious, written at a pace that tugs you in and moves you along just fast enough to not want to get the ride, Ms. Cooper must have some magic of her own, just touching her pen.