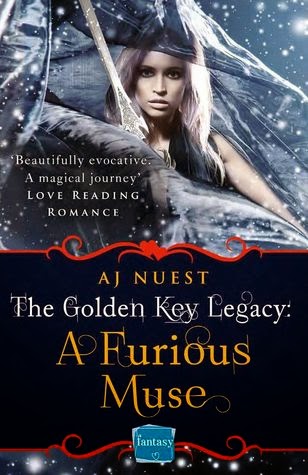 A Furious Muse
by A.J. Nuest

Since the day of her birth, Princess Faedrah Austiere has been defined by her place within the kingdom. As the single heir to the half-blood gypsy king and his prophesied white queen, she is fiercely protected, shuttered inside an ivory castle and well-trained in the art of war. Yet neither her obligations as future queen nor the black infestation threatening her kingdom fail to hinder the mysterious pull of the antique armoire hidden in her parents’ bedchamber. And stealing the golden key for a leap through time is the only way to confront the dark lord haunting her dreams.

One face. The image of one defiant, relentless woman has been stuck in Rhys McEleod’s head ever since he was old enough paint her luscious curves on the canvas. But the day she walks into his life off the street—sexier than hell and itching for a fight—he’s not convinced she’s the same women he’s envisioned since childhood. That is, not until he spots the golden key around her neck—an object he’d never fully shown in any of his paintings.

Now if he could just persuade his lovely muse he’s not the enemy. Unless the elusive Faedrah Austiere learns to trust him, he’ll never have her in his bed—the one place he’s convinced she belongs.

My Review
A Furious Muse by A.J. Nuest

So, I see a spin-off series from AJ Nuest and I say, this is the author that could write a grocery list and it would leave me in a puddle of goo, and yet…was I ready for the next generation of Golden Key heroes and heroines? I take the plunge and once again, Ms. Nuest has me wanting more, NOW.A Furious Muse is another magical treat from the pen of AJ Nuest, who’s only problem as an author is that she cannot write fast enough for my taste!

Princess Faedrah is the heir to the throne, the protected pearl of the kingdom, the shining apple in her parents’ eyes and one well-trained warrior in her own right. So why do her dreams of a mysterious man haunt her? Is it part of the evil threatening her kingdom? Is she pulled to the magical armoire in her parents’ bedchamber because it is off limits or is there something else sucking her in? What made her grab the golden key and open those doors to “the mirror” and take a leap through time?

Ladies’ man, Rhys McLeod is a talented, twenty-first century Earth, artist and his creations of a fierce and beautiful warrior woman become his life focus, his muse, as he brings her to life on canvas. She mesmerizes him, she makes him rich, and then, she storms through his shop door, in the flesh, angry as a pit bull, demanding he tell her how he painted her likeness. Like moths to the flame their futures become bound and they don’t even know it yet.

Get ready for AJ Nuest’s signature clash of the romantic titans as these two scorch each tension-filled scene with their passions. From one time to the next, Ms. Nuest manages to make the switch seamlessly, from the world she has created for each era with dialogue that feels real and she does it in so few pages! I have to say, it felt like old home week when Ollie appeared, as “Ollie” as ever! Loved every single page, even the ones almost too hot to handle!

I received this copy from A.J. Nuest in exchange for my honest review!