Christmas with the White Brothers by L.V. Lewis Blitz & Giveaway 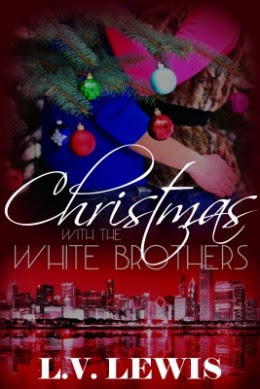 Keisha Beale has an ‘arrangement’ with one of the richest men in Chicago, who treats her like a queen, but she wants normalcy for the holidays. Well, as much normal as you can get from a man like Tristan White, who has everything and doesn’t think love is something he needs.
Jada Jameson’s dark past may be surprising to some considering the family she comes from. Nathan White wants her in every way a man wants a woman, but she needs hardcore kink, and the pace at which their relationship is progressing has left her wanting more. Will the ladies of Kente Studio Records get everything they want from their first Christmas with the White brothers?

L.V. Lewis is a new author who decided that stories like Fifty Shades of Grey needed a little more diversity and comedy in them. Lewis is married and lives in South Georgia. Lewis loves romances that involve interracial couples because L. V. envisions a world one day where it won’t matter to anyone else who you love (because despite the civil rights movement, and a biracial US President, we aren’t there yet). LV and spouse are political junkies. One leans right, the other left. Thankfully, this has never caused any issues in their relationship. If Lewis told you which of them was the Democrat and which was the Republican, you just might be able to figure out which is Dominant and which is submissive.