Jaguar Pride by Terry Spears (Heart of the Jaguar #4) 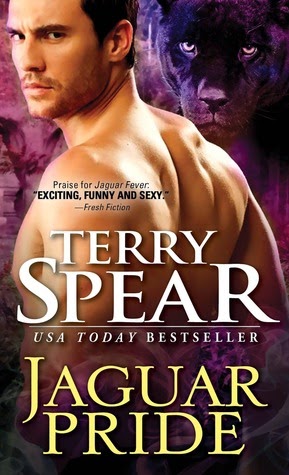 Synopsis:
JAG Special Forces operatives like Golden Claw agent Melissa Overton and her partner, Huntley Anderson, are trained for the most dangerous missions in the harshest environments. These hardened jaguar shifters can handle any variable, even . . . babies?

When Huntley and Melissa find two jaguar shifter cubs snoozing in their jungle hut while on assignment, they have to keep the cubs and each other safe from ruthless poachers, bringing these partners closer in ways they never expected...

Huntley and Melissa are two agents on the JAG special Forces. They are partnered and sent to the stop animal poaching in the rain forest. Both have a mutual appreciation for each other but are in relationships at home.

As the story progress, Huntley and Melissa uncover a strong poaching operation that have ties close to home. Shifters have been taken in their animal forms.

Huntley and Melissa's personal relationships fall apart, leaving them rooming together when a great lead comes up to track down the poachers in the USA boarders. The lead sends them back to the rain forest where the danger for them has increased 10 fold and they must put themselves on the line as trapped animals in a cage.

The heat between Huntley and Melissa is slow growing but quickly becomes an inferno.

This is a very enjoyable and highly entertaining, Jaguar Pride won't disappoint the shifter romance fan.

I received this ARC copy of Jaguar Pride from SOURCEBOOKS Casablanca in exchange for a honest review. This book is set for publication February 3, 2015.