Rise to Power by Uvi Poznansky ( The David Chronicles, #1) 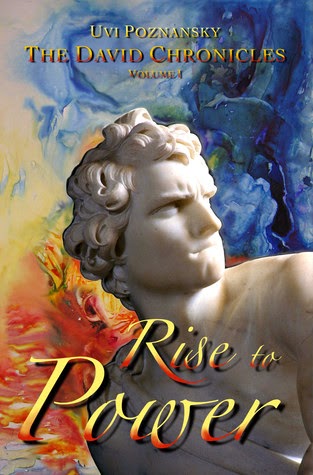 Rise to Power
by Uvi Poznansky

Here is the story of David as you have never heard it before: from the king himself, telling the unofficial version, the one he never allowed his court scribes to recount. In his mind, history is written to praise the victorious—but at the last stretch of his illustrious life, he feels an irresistible urge to tell the truth. In the first volume, Rise to Power, David gives you a fascinating account of his early years, culminating with a tribal coronation. Rooted in ancient lore, his is a surprisingly modern memoir.

In an era of cruelty, when destroying the enemy is deemed a sacred directive, the slayer of Goliath finds a way to become larger than life. His search for a path to power leads him in ways that are, at times, scandalous. Notorious for his contradictions, David is seen by others as a gifted court entertainer, a successful captain in Saul’s army, a cunning fugitive, a traitor leading a gang of felons, and a ruthless raider of neighboring towns who leaves no witnesses behind.

How does he see himself, during this first phase of his life? With his hands stained with blood, can he find an inner balance between conflicting drives: his ambition for the crown, his determination to survive the conflict with Saul, and his longing for purity, for a touch of the divine, as expressed so lyrically in his psalms and music?

My Review
Rise to Power by Uvi Poznansky

Who would dare to take on a legendary Biblical figure and make him into a flawed mere mortal, enamored by power, beauty and a lust for life’s treasures and pleasures of the flesh? The answer is Uvi Poznansky in a trilogy starting with Rise to Power, a journey through the life, times, and mind of David, slayer of Goliath, King, poet and lover. Ms. Poznansky humanizes David by entering her David’s head, finding how his thought processes work and laying the foundation for a stunning read where one sees, feels and breathes the ancient air while never noticing the dialogue’s modern feel. We aren’t asked to translate meanings, Ms. Poznansky wants us to relate to and understand the man who mesmerized his world with his actions, good or bad. Sit back and get lost in a history that comes alive with her words.

David reflects on his life as he becomes frail, going back to his youth, the time when he thought he could never die because life still held so many challenges for him to conquer. He relives his quest for power, his plans, his scheming and his artistic side. With a velvet tongue he causes listeners to swoon, with his thirst for sexual conquest, he takes what he wants, when he wants it and makes no apologies. The world is his; he can read people, decipher their intent and knows that only a fool would allow historians to paint a true picture of him. That said, what has Uvi Poznansky done? Has she placed a fictional blot on a man who represented victory and triumph in some many ways or has she put him in perspective?

David was a man, no more, no less, but Ms. Poznansky gave him renewed flesh and bones, along with each character that crossed David’s path or impacted his life. David comes to life under her carefully guided hand without any religious leaning, just a wonderfully written tale of what David may have been, may have felt and may have done. The blending of fact and fiction is flawless, unlike our David. Again, Ms. Poznansky adds her distinctive signature to historical fiction as she dazzles the minds and imaginations of her readers.