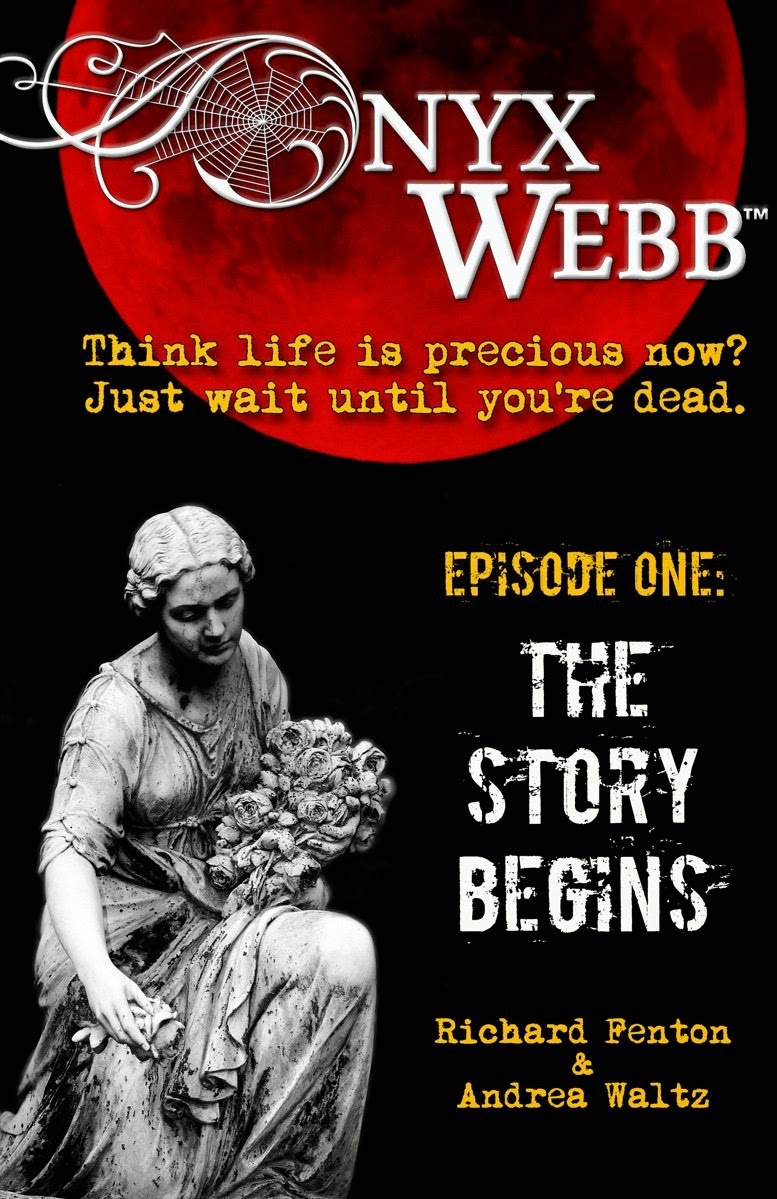 It’s June, 1980 and piano prodigy, Juniper Cole is on the way to her senior prom.

- It’s January 2010, and Koda Mulvaney has blown through his 20 million dollar trust fund and is told by his father to return home and get to work.

- It’s August, 1904 and little Onyx Webb is on her way to the famous World’s Fair in St. Louis with her father, Catfish.

Two of the three will see a ghost, one will become a ghost and everyone will learn that life is hard to let go of even when you’re dead. And that's just Episode One. A paranormal suspense, supernatural romance, with a dash of historical fiction, Onyx Webb is what author Richard Fenton and Andrea Waltz have called creep-spiration. The stories may haunt you, the darkness may disturb you, but ultimately you’ll be reminded to treasure every moment of your life because… If you think life is precious now? Just wait until you’re dead

What could a six-year-old from the turn of the century (1904), an irresponsible trust fund baby from the 21st century (2010) and a young piano prodigy (1980) have in common? Three lives, three eras, three completely divergent circumstances, one suspense-filled tale plated up in serial courses where we are served a small portion at time! Onyx Webb: Episode One-the Story Begins by Andrea Waltz and Richard Fenton answers the question: “Is there anything new and unique on the Paranormal Menu?” with a resounding YES!
Onyx Webb is a young child filled with the wonder and awe of the St. Louis World’s Fair, but her short life was about to be become a nightmare with a dark ending. Juniper is a piano prodigy whose talent has garnered her the attention of the media as a child and who is now a teen about to attending her prom. Character number three has never wanted for anything, never experienced the reality of those who must work for a living, until he has let his trust fund flow through his fingers like champagne from a fountain. What possible ties could they have? Could that tie be Onyx? Has her spirit refused to let go of life? Does she have a message to deliver? A plea?

Get ready to expect the unexpected and to become addicted to NEEDING the answers! What a masterful, twisted start to a web of suspense that looks far from untangled. Andrea Waltz and Richard Fenton combine talents and send us spiraling down into the world they have created, in their maze of seemingly unrelated eras, people and events. Far from frustrating, this enticing start to a serial series is magnetic, dark and promising! I’m in for the long haul, hook, line and sinker!

These authors have a way of presenting a tale that never stutters or confuses as we are taken on a journey bouncing off one era to another until we are standing at a precipice of darkness with no easy way out, except forward into the next addition. This is one serial to take a look at!