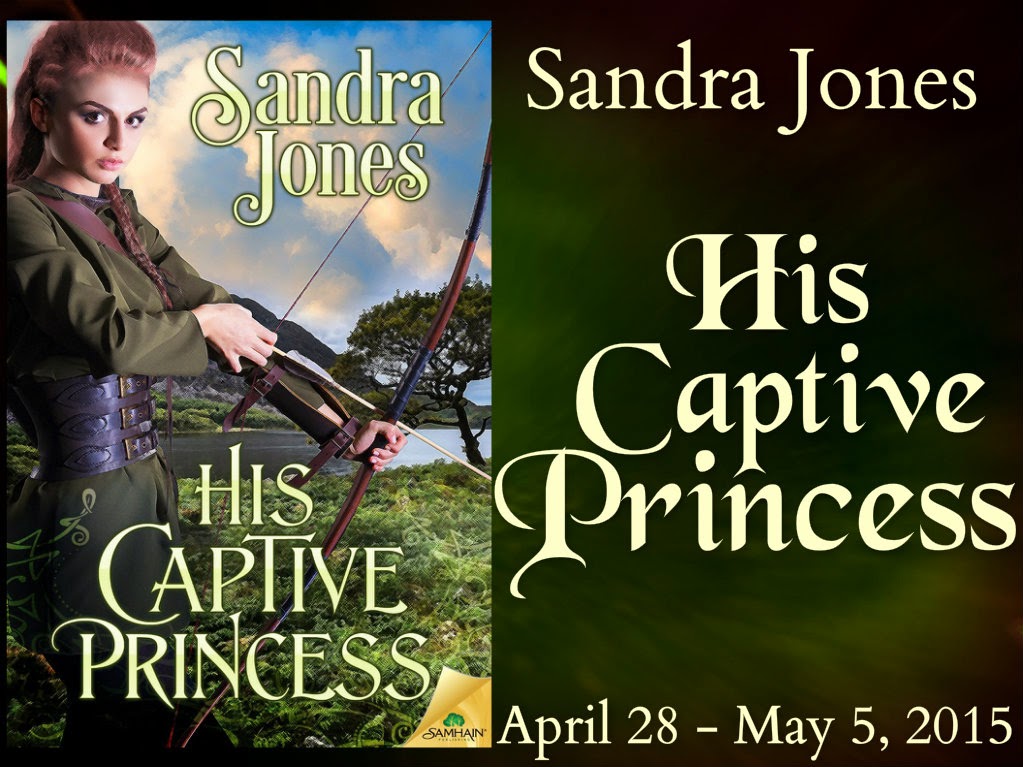 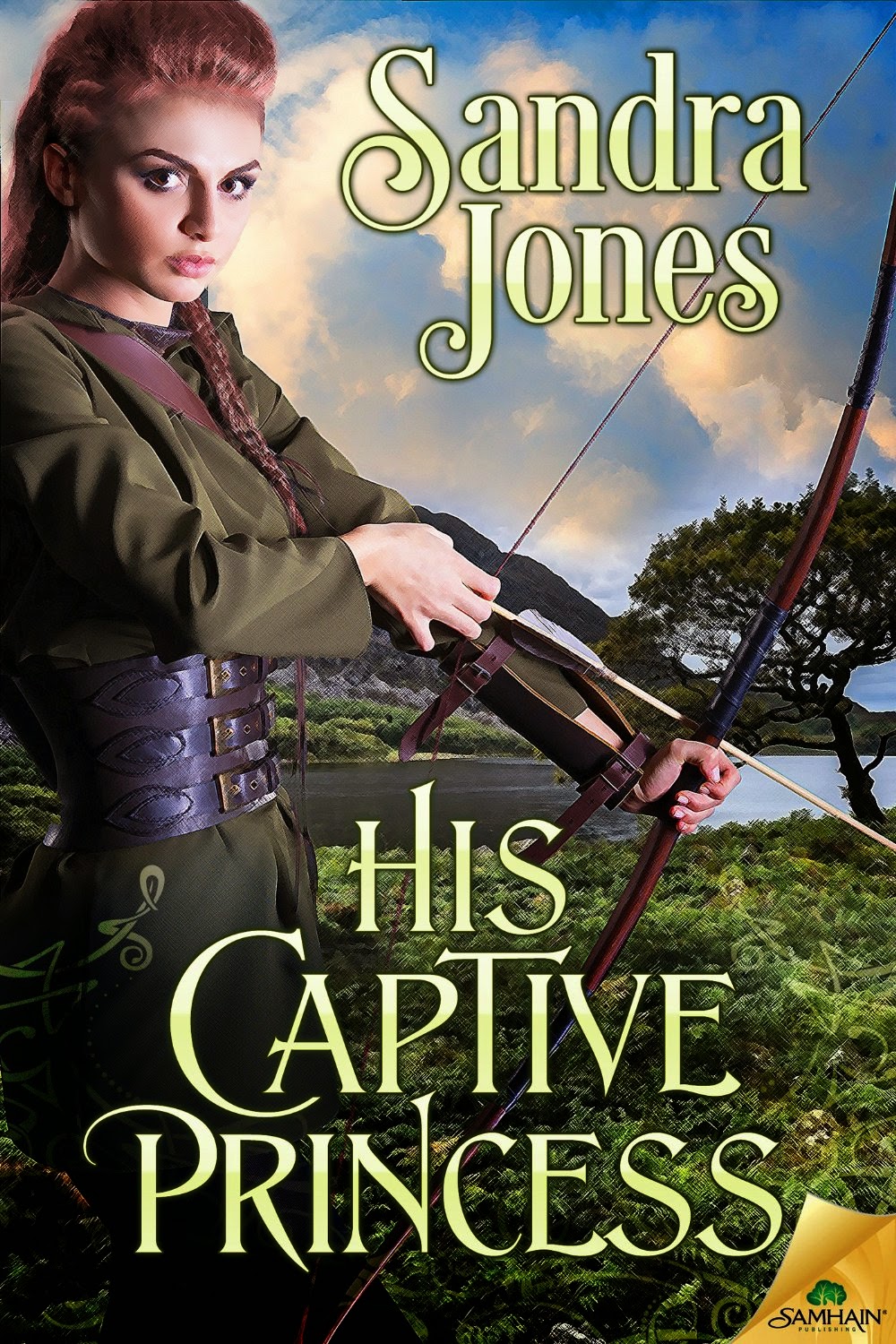 His Captive Princess
by Sandra Jones

Warren de Tracy was assured the Welsh village of Dinefwr would be an easy conquest, as would the widow of its fallen prince. Wedding her will appease the locals and win the respect of his liege, the usurper King Stephen.

Instead, Warren is ambushed, taken prisoner by a hooded Welshwoman with skin that glows like moonlight. If he must die at her hands, at least his honorable death will silence the whispers of disloyalty hanging over his name.

Princess Eleri has never seen a knight as stoic—and as eager to die—as Warren. She’d love to oblige the bastard, but something in his ocean-blue eyes stays her hand. Plus, suspicion nags at her, for the arrows that wounded him and killed his men are Norman, not Welsh.

A ghostly prophecy portends danger that thrusts the enemies closer together, where hate explodes into passion that won’t allow Eleri to surrender Warren to her vengeful clan. But returning him to his king breaks more than it mends…and for Warren, retaliation will be sweet, indeed.

Warning: Contains a Norman warrior with a thirst for justice, a Welsh rebel princess with second sight and a steady bow hand, magical prophecies, and a plot of royal proportions.

His Captive Princess by Sandra Jones
Lesson #1-Never, and I mean NEVER cross a prophecy.

Lesson #2-Never, and I mean NEVER cross a stoic knight on a mission to save his good standing.

Lesson #3-If you are going to retaliate and seek revenge, make it worth your while in every way and watch your back, what goes around and around could end up with a choke hold on your heart!

Warren thought this would be an easy quest, charm the widowed princess, wed her and bed her and all will be better in the world, politically speaking. He was not expecting to die at the hands of the very Welsh princess he had hoped to win over. Eleri is not the shrinking violet Warren was expecting, she is strong, protective and a force to be reckoned with, well skilled in the art of both offense and defense. As her prisoner, can Warren charm her with his quiet ways or will the fiery woman find him a better prize as an offering to her enemy, William, the Usurper. After all, wasn’t the plan to take over her priceless land for the King? Is going against the wishes of her clan worth the trouble sure to come her way? Never let it be said that turnabout isn’t fair play or that all’s fair in love and war…as two warriors find that making love, not war makes captivity that much more enjoyable.

His Captive Princess by Sandra Jones is historical romance at its best! Not too heavy, not too frivolous, but filled with some top rate romantic tension between two strong and clever adversaries. Nothing like a sweet romance between enemies to put life in perspective! Sandra Jones has set the scenes, painted the backdrops and cued her players with all of the precision of an artiste! Great dialogue, attitude and heat, all while traveling back in time when men were men and women could still pull the rug out from under them!

“‘Your Highness’?” Warren jerked in astonishment, pulling against his bonds. The ropes chafed his raw skin, sending a fresh wave of pain down his arms. “You’re of royal blood?”
She leaned over him, reaching for his bonds. “Hush! In addition to your arrow wound, I trow your tongue has healed as well these past days. It would behoove you to use it less and just be grateful you’re alive.”
Her breasts hovered inches above his face. In fact, if he lifted his head, he could bury his face between them. What would she do, this spirited wench, if he chose to do so? He would’ve enjoyed finding out if circumstances had been different. “I’d rather be dead than be a prisoner. But first...I’ll kiss your feet if you’d scratch my nose.”
She made a choking noise in her throat that almost sounded like amusement.
He felt a tug at his ropes and the friction of a knife. By the saints, she was freeing him. He couldn’t allow it.
Air stung his raw skin as soon as one of his wrists came loose. With his one arm still useless in its restraints, he shot out his free hand and clutched her forearm. Using all his strength, he turned her over beneath him, wedging her between his torso and the bed. Nose to nose, he could make out her eyes gone wide with shock in the darkness. “No!” he growled. “Do not let me leave here alive.”
Suddenly, her warrior was upon him and his knife back against Warren’s throat. “Get off the princess, you cur!”
The woman’s blade touched his chest plate. She could dispatch him with ease. Her arms were strong and lean. Her body was far from frail, and he recalled her skillful defeat of his conroi. She twisted beneath his pelvis defensively, and the grinding of her soft mound awoke his sex. Shame heated his cheeks at his sudden need and dark desires. This one time, he would allow himself to speak his mind. “If you release me, Princess, I’ll go to Kidwelly and inform my commanders what has befallen my five men at the hands of you and your people. The king will strike at the subjects of Cantref Mawr with vengeance such as you’ve never known.”
Her expression shifted from stark panic to slow derision as her saucy lips curved up at one corner. “You think I don’t know what you’re capable of?” Her eyes flashed downward meaningfully, and he knew she’d noted the turn of his wicked thoughts. “You want to have your way with me. To tear my clothing from my body and part my legs. But you know nothing of my people, Norman. You haven’t even bothered to learn the language—” she broke off, slurring in Welsh at her vassal.
The burly guard grabbed Warren’s bandaged shoulder, twisting it back until bile climbed in his throat. “Umpff!” While he convulsed in pain, the woman slipped loose and turned him on his back, pinning his groin beneath two very sharp knees. He hissed through his teeth, “Par les saints!”
If he’d been successful in his mission, this devil-wench would’ve been his bride?
“You are my prisoner, knight.” She planted the flat of her hand against his neck, leaving no doubt of her desire for domination as her angry pulse drummed against his skin. “I am the Princess of Deheubarth, widow of Prince Owain ap Daffyd, murdered by your Norman peers. It will be my pleasure keeping you alive. We’re taking you to those who will do with you what they will. I care not. Until then, you are my dog. My captive. My slave. And you will obey!”

Sandra proudly considers herself a history geek. She is the author of five historical romances including the new River Rogues series set in frontier America. When not researching or writing, she enjoys traveling, genealogy (she’s the direct descendant of a Norman knight) and watching British TV. She and her husband of twenty-five years live in a cabin with two spoiled cats and occasionally attend Renaissance fairs.

She also loves chatting with readers. You can connect with Sandra at any of the following links: