Marked for Magic by Daisy Banks 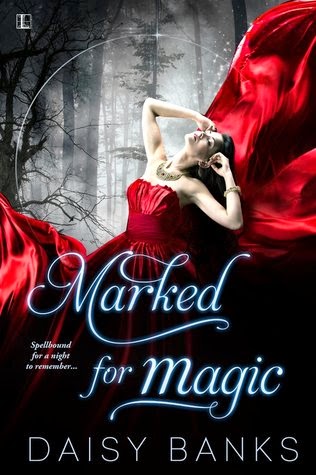 The witch mark on Nin’s hand is a curse. She has no magic powers, whatever the lore says. But the village believes. The old crone’s wisdom is to see her banished. Ragged and hungry, she must serve the Mage. Alone in his tower, she is his chattel. But Mage Thabit is not what Nin expected—the bright green eyes and supple form under his cloak are not the stuff of nightmares, and kindness hides in his brusque heart. Thabit senses that Nin is more than she seems, too. When true nightmares haunt the land, it is precisely her elusive powers that might deliver them…

Marked For Magic by Daisy Banks

Marked for Magic is an interesting, enjoyable paranormal fantasy.

Eighteen year old, Nin is cast out of her village for a “witch mark”. Nin seeks the Mage, Thabit, with hopes that he will take her in. After some begging, Nin convinces Thabit to give her a chance.

Thabit quickly discovers that Nin has untapped but powerful magic. While he tutors her in magical ways, he discovers a romantic connection that he is struggling to deny. Realizing he can't keep his impulses at bay he seeks Lady Cassandra's assistance in Nin's magical education. But as soon as Nin reaches the palace and Lady Cassandra's tutelage, the kingdom comes under attack from an ancient evil; an evil that can only be destroyed by Nin's special abilities.

The story is good and I did loved the premise but I struggled with the Thabit's and Nin's interaction which disconnected me from the story. Some of it just seemed a bit off track, distracting from the main story; but ultimate came back to a predictable conclusion. I liked it and I would be very interested in delving deeper into this world. In the end, I give Marked for Magic 3.5 stars.

I received this ARC copy of Marked for Magic from Kensington Books in exchange for a honest review. This book is set for publication April 28, 2015.