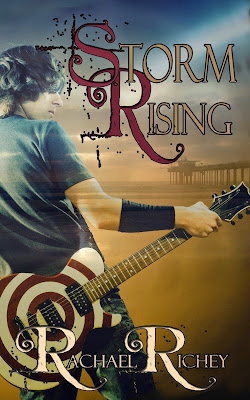 Frontman of the grunge rock band NightHawk, Gideon Hawk has had enough of the rock star life. He is jaded, disillusioned, and haunted by the memory of an unresolved heartbreak. On a whim, he leaves the band in New York and heads to England in search of answers.

After attending the funeral of her estranged mother, Abigail Thomson makes a shocking discovery in her parents’ attic. The still-raw memories that surface, along with even more startling discoveries, force Abi to face a devastating truth that leads to a series of life-changing events. She and Gideon must race against time to reclaim the life stolen from them a decade before.

Rachael Richey’s Storm Rising is an emotional trip through time and back as flashbacks to a teen couple in love who were separated by a continent have their heartstrings shredded through deceit,lies, and secrets kept by people in their lives who should have protected them, and stand by them, no matter what. Ten years have passed since Gideon left Abi behind to seek fame and fortune as a rock star. As a teen, Abi lived a nightmare after he was gone that no one should have to endure, and still she loved him. Now he is back, determined to get answers, to end the heartache he has endured not knowing what happened to her. In Rachael Richey’s dramatic presentation of their story, the vile and selfish deeds of others have hurt more than Gideon and Abi and its possible even the truth will not be able to undo the damage of the past ten years, especially for an innocent victim they have never met.

From the first chapter, Ms. Richey sets the hook and I am caught up in a tale of unbelievably cruel proportions that breaks the heart and causes silent screams of outrage. Interspersed throughout is a tale of true friendship and loyalty, and Rachael Richey does a wonderful job of bringing these characters to life as young adults in a world where they are too young and inexperienced to maneuver. With a large cast of characters all playing a pivotal role in this tale, Ms. Richey is able to blend it all together and bring home a tale of true love and learning to fight for your own happiness, even in the eye of chaos and darkness.

If you need a fresh tale of cotnemporary romance with suspense and less than perfect characters, I highly recommend this tale from Rachael Richey.


I received this copy from Rachael Richey in exchange for my honest review.